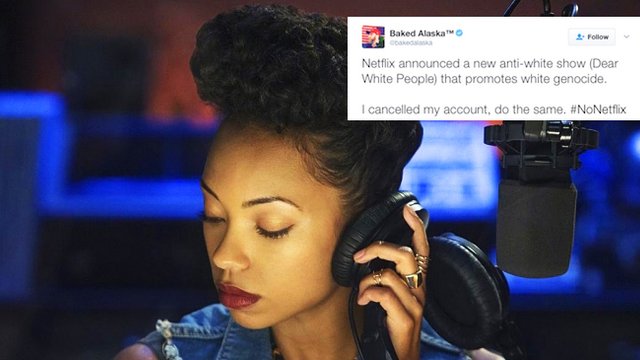 Netflix’s newest series has been called racist. This is why it's not...

Netflix have released Dear White People, a new series based on the popular 2014 film of the same name. Sadly the trailer, which tackles conversations around racist costumes and blackface, hasn't been well-received in some corners of the internet. Accusations of anti-white racism and even "white-genocide" have been banded around Twitter, as well as calls for a Netflix boycott.

Now, we know that conversations about race can make lots of people feel a little squeamish. But sometimes a conversation is too important to tip-toe around. No, Dear White People isn't racist. Before we get into the why, take a look at the trailer that's been accused of promoting white genocide.

There's a whole lot of anger out there about a pretty innocent trailer. Let's look at why some of that anger might be there - and why it's misguided.

If you're white and live in a country with a majority white population, you're probably not that used to being described as "white". That's because whiteness is considered neutral. So you could happily go through your life never having your race pointed out to you.

This has numerous up-sides to it, ranging from plasters being available in your skin-tone, to being more likely to get into some courses at top universities. However, it does have one particular downside - when it's time to discuss being white, and what being white means, it can feel a little unsettling to hear your race called out. But that's not really what racism is. Nevertheless, white people can sometimes be so sensitive about having their race pointed out that they respond in all manner of weird and outlandish ways.

2) "Racism" is more than being mean to someone because of their race.

The original Dear White People explains this pretty nicely, so let's see what they had to say on the matter:

If you haven't come across this way of thinking before, it might be a little hard to digest. So let's break it down. Racism is about more than hurting someone's feelings. It's about who gets to control who. A great example of this is how black and white American's are treated when it comes to drug offences. While both groups are equally as likely to smoke weed, black americans are 3.7 time more likely to be arrested for it.

Every race has the capacity to be prejudiced, and that should be called out. But your ability to be racist is based on how much power the race you belong to holds in society. And in America, black people just don't have that sort of power.

It's just an overly-dramatic turn of phrase invented by racist people to describe diversity and interracial relationships, to make them seem like bad things. It's a bit like how Voldemort thinks Muggles having babies with pure-bloods is bad, or that muggle-born witches and wizards are stealing from pure-blood wizards just by exists. And if Voldemort believes in it, you know it's probably not something you want to believe in too. It's also a bit like comparing a diversity scheme to the holocaust. Which is super disrespectful.

4) Dear White People isn't about being divisive - it's just pointing out a divide that already exists.

Racial tensions exist in college campuses, just as they exist throughout the world. And the first step to recovery, as we all know, is admitting that there's a problem. That's what Dear White People sets out to do. Even if you don't believe you're a racist person, you still have the power to do something about racism that exists elsewhere. And by being confronted by what racism really is and really looks like, you might learn how to be a better ally to those who experience it. Dear White People might be a bit of a brash way to start the conversation, but sometimes you have to be bold to get noticed. And when the conversation is this important, getting noticed is vital.

Even if the title makes you feel a little uncomfortable, Dear White People is going to be important viewing for white people. As the show's director Justin Simien said in a recent interview, "Stories teach us empathy. They reveal to us ourselves in the skins of others." And this is one story that's been tiptoed around for far too long.

Dear White People is now available to stream on Netflix.