Riverdale: Is Sheriff Keller The Killer? Here's All The Evidence So Far 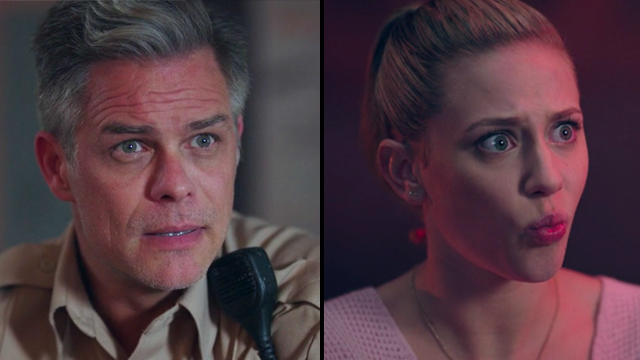 Keller is the killer and that’s that on that.

Let's talk about the killer on Riverdale, shall we?

While we've got reason to suspect absolutely everyone in the town, a LOT of theories are starting to form about Sheriff Keller's involvement in the investigation and the murders themselves. In fact, there's actually SO much evidence to suggest he's actually part of this whole nightmare, we can hardly cope. Shall we investigate?

Sheriff Keller might be the most unhelpful law enforcement officer that has EVER been portrayed on television. Not only did he fail to show up to Pop's Diner when called on the morning that Fred was shot, he has constantly been avoiding Archie's phone calls and acting like he hasn't got a clue about what's going on. In fact, Alice Cooper has done more to help identify the killer in half an hour than Sheriff Keller has this season so far.

Exhibit B: He's the ONLY one who knew that Archie thought there was a trend with the murders.

Cast your minds back to that scene in episode two where Archie confesses to Keller that he believes the killer is targeting people he loves. Literally 0.2 seconds after Archie explains that he thinks he's the link, two people with no real link to him (Midge and Moose) are attacked, throwing his entire theory off of balance.

Is it a mere coincidence that the killer decided to spice things up a little bit or did Keller, the only one who knew about Archie's theory, have something to do with it?

Exhibit C: No one seems to know where he was on that morning and he didn’t arrive when Pop called the cops.

It was a reasonable hour of the morning when Fred got shot, so one would assume that if someone called the Sheriff's office saying there's been a shooting in a local diner in his town, he'd be out the door ASAP. But he wasn't... and that's a bit sus.

In season one, Keller was easy to track down and the first on every scene regarding information about Jason Blossom's murder. He was also out the door with a full squadron of cops faster than you can say "Hiram Lodge is Daddy" when the Blossom's called the police to tell them Clifford had hung himself.

Ladies and gentlemen of the jury, we ask you this: Where was he? And what was he doing that was more important than a shooting?

Exhibit D: He seems determined to blame the Serpents for the whole thing.

When Keller initially questioned Archie at the hospital, he tried to prompt him with a leading question about "a symbol" on the back of the shooter's jacket. Is Keller trying to frame the Serpents so he can displace the focus from him and his suspicious disregard for the investigation on to them and their shady dealings?

No one who was genuinely interested in seeing a murderer brought to justice would go out of their way to NOT hear any new information about the incident. Say no more, your honour.

Exhibit F: His ominous reading of the Black Hood's letter.

What better way to hide the killer in plain sight than getting him to read the chilling letter that was sent to Alice Cooper. Don't for one second think that wasn't a deliberate move...

Exhibit G: How did the Black Hood get into the prison - with a gun?

At the end of episode 6, the Sugarman is taken to prison and then later shot by the Black Hood in his cell. Not many people can get into a police station, armed and manage to shoot a prisoner, can they? Unless they're a cop themselves. Keller wasn't on duty that night either. When Betty finds him at Pop's, he says he's off the clock and then he leaves... but to go where, exactly?

Despite there being hella evidence that would suggest Sheriff Keller is a prime suspect, there is one important detail that doesn't quite match up: Keller doesn't look anything like the man under the black hood.

He doesn't. His eyebrows don't match and his eyes aren't the same. (And neither are Hal Cooper's, for all you Papa Coop truthers out there.) There ARE two people who bare a striking resemblance to the shooter though... the Serpent with the long hair and *ahem* Clifford Blossom. However, judging by these pictures taken during filming, the actor under the hood might be someone we haven't actually met yet. (Unless he's being used as a decoy actor.)

Even if it's clearly not Keller under the hood, there's a good chance that Keller is either working with someone or is being paid off or threatened.

Red flags were also raised in episode two when Fred Andrews appeared less than enthusiastic toward Archie's eagerness to solve the mystery surrounding his shooter. Could Sheriff Keller be avoiding the investigation in order to help protect Fred in some way? Then again, killing a bunch of innocent people (including shooting at two high school students, for f*ck sake) is going a bit too far for that scenario to be true.

The sleuth continues… but just know that Sheriff Keller IS a part of this and he has 100% been clocked.