17 Killer Memes That Only ‘IT’ Fans Will Understand 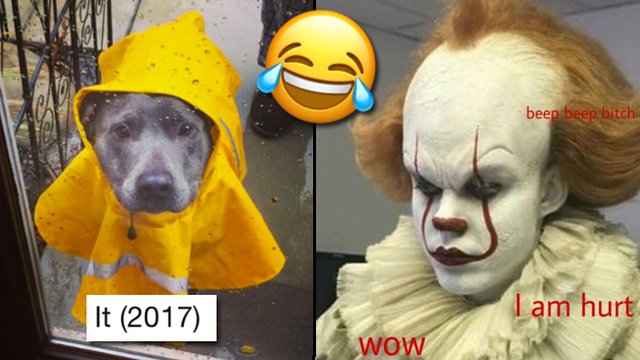 Pennywise and The Losers' Club have given the internet some serious gifts since the release of the movie.

While It is undoubtedly the best and most successful horror movie of the year, it's real gift to the world has been in the form of memes. Yep, ever since the movie's release, the internet has gone wild for every edit and picture caption they can lay their grubby Tumblr-loving hands on.

Here are just a few of our absolute faves that we've spotted so far:

6) We're basically all of them.

7) Maybe our fave edit yet.

This is by far the funniest Pennywise meme yet. nothing gets better than this pic.twitter.com/QGoM8Ne4K0

"I can cancel your remaining student loan balance down here" https://t.co/RiGv8kgsES

Pennywise: "Hey I got your ex down here"

I left for 1 day and now Pennywise is a gay icon in love with the queer heartthrob BabaDook???? I'm in. pic.twitter.com/MmrgmriZPT

wow, pennywise in the new IT film looks great. pic.twitter.com/H56v4fJtrn

pennywise waiting 27 years to get back on his bullshit pic.twitter.com/0dDXLEa8YT

pennywise after he lost power over the losers https://t.co/bjzrNFIEN9

me: (shoving myself in the sewer)

pennywise: no seriously its fine

me: no gimme a sec