The 'IT' Cast Just Got Submitted For The Oscars...But Will They Win? 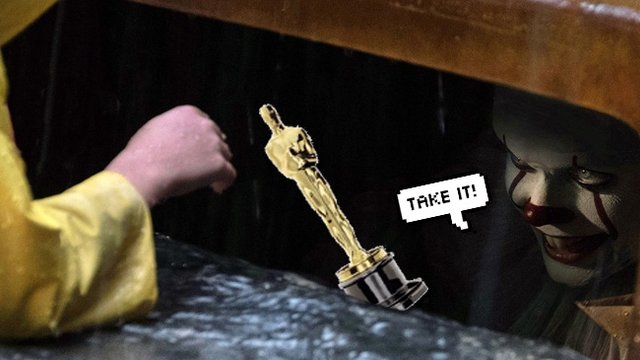 Fans of the record breaking horror movie hit of the summer IT have been going wild this week after an image circulated on social media reportedly showing all the categories studio Warner Bros are hoping to gain Oscar nominations:

Well, turns out the image speaks the truth as Warner Bros have now announced the start of their Oscar campaign for the movie, submitting each of the above names in their relevant categories.

So, what does this actually mean? Well, ahead of the official announcement of the nominees in January 2018, the studio will be holding screening and events so that the Oscar voters are aware that IT is very much available 'For Your Consideration'. Details of screenings and the campaign in general are viewable here.

But the question is, will they grab any nominations? Given the incredible reviews and box office success we certainly wouldn't count them out, with Make Up categories a seeming dead cert but also some potential nods in the screenplay and acting categories (come through Bill Skarsgård).

The 2018 Academy Awards will take place on March 4th 2018 at the Dolby Theatre in Hollywood hosted by Jimmy Kimmel.

Check out the full list of categories where IT has been submitted below:

Based on the novel by

Make Up Heads of Department