How Problematic Does Your Fave Have To Be Before You Ditch Them? 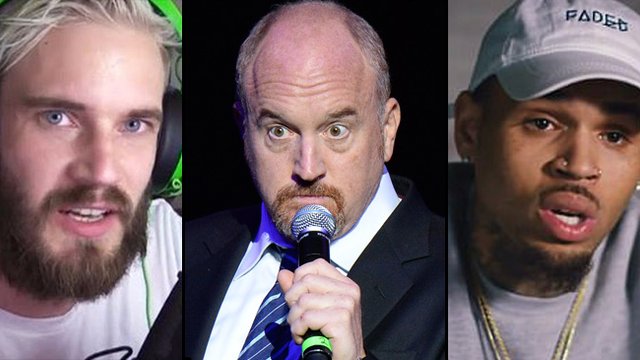 With Louis CK, Kevin Spacey and countless others accused of misconduct, how quickly are we able to let go of our faves when they are revealed to be problematic?

Can we ever seperate art from the artist? How many of your faves are problematic? And should you stop yourself from following their work because of that?

Like the overwhelming majority of comedy nerds of my generation, I was a big fan of Louis CK, both in his guise as a stand-up and as the writer and star of the weirdly esoteric sitcom Louie. His presence on stage was unmatched, his timing impeccable and his twisted observations on life offer a fresh perspective on the male experience that set him apart from his contemporaries. I gladly paid my hard earned cash to see him perform at London's glitzy Hammersmith Apollo in 2013 after eagerly waiting for several hours in an online queue for tickets. Many of my comedy friends who I had performed alongside were in attendance that night as were most of the famous faces you'd normally see up on the stage. Everyone came to worship at the altar of Louis CK because he, quite simply, was the best.

I was a big fan of Louis CK. But, in the wake of the multiple allegations of sexual misconduct against him, I have absolutely no problem never watching his work again. And neither should you.

In the wake of the many celebrity scandals that have broken over the last few weeks, there is of course the general praise for the bravery of the victims who have spoken out, a line of questioning as to how this remained hidden for so long and the social media-based heartbreak of those who had admired the figure in question.

But there is also always an element of the fandom that wants to remain loyal, who do not want to let go of their fave TV show/album/movie quite so easily. They know their fave has fucked up yet they want to stand by them, having already invested so much time and effort in supporting them this far. It's an understandable urge but an ugly one nonetheless.

In the case of CK, it was incredibly easy for me to ditch my love of his work, his monologues on masculinity or gender dynamics now forever tarnished by the actions of the man performing them.

Sometimes the separation is not as clear cut. Can we still enjoy a film that Harvey Weinstein helped to finance? Is The Usual Suspects now lost to the ages thanks to Kevin Spacey? Will we ever be able to see Gossip Girl in the same light now that Ed Westwick has been accused of rape? Is it ok to bop to 'Loyal' by Chris Brown if it comes on in the club? Can we still get gaming content from PewDiePie?

Fans will have asked themselves these questions over the last few weeks and will no doubt continue to do so as more revelations come to light. But I would encourage those fans to not only remember the victims but also the mind of the perputrator - that same person who once brought you joy and entertainment was also capable of these horrible acts.

Art, in whatever form, is personal and, if it's done right, then it should be hard to seperate the art from the artist. In the case of Louis CK, it makes it even easier to kick him to the curb.