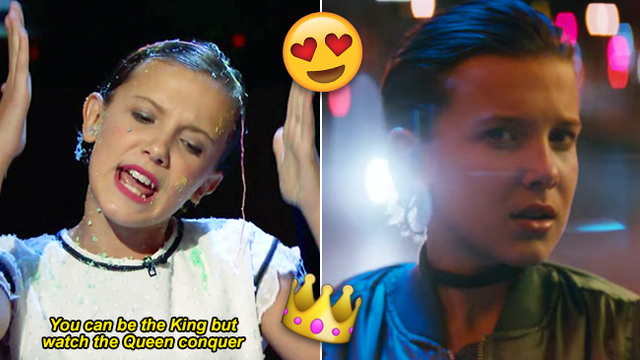 It goes without saying that Millie Bobby Brown has claimed 2016 as her own. With Stranger Things season 2 arriving next year, bucket loads of nominations heading her way and many more projects in the pipeline, we're expecting the legendary Miss MBB to become even bigger and brighter in 2017. Here's all the times she slayed us in 2016 with her majesty.

1) When she shaved her head in preparation of playing Eleven. #Slayed

2) When she nailed every single line in Nicki Minaj's verse on 'Monster'. #Slayed

3) When she TURNT UP to Bruno Mars' 'Uptown Funk' at the Emmys with her loyal squad. #Slayed

4) And when she handed out sandwiches in character in the crowd. #Slayed

5) When we discovered her YouTube singing channel and just couldn't help but marvel at her voice. #Slayed

6) When she turned a snap bracelet into the most stylish choker we've ever seen. #Slayed

7) When she absolutely SMASHED these cover shoots... #Slayed

8) When she pulled a Negan from The Walking Dead. #Slayed

9) When she starred in the video for Sigma ft. Birdy's 'Find Me'. #Slayed

10) When she hilariously spoke about her first kiss with Finn Wolfhard. #Slayed

11) Literally whenever she posted a picture with her cast mates. #Slayed

12) Especially this one. #Slayed 14) Actually if we really think about it, Millie Bobby Brown slayed our lives literally every time...