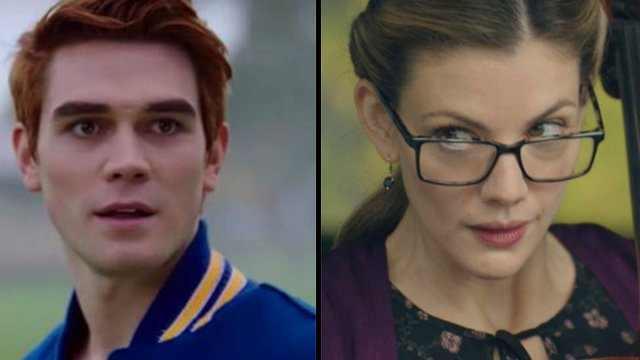 Someone call the cops, immediately.

Just as soon as we fell in love with K.J. Apa's abs in Riverdale, we also made an enemy in Miss Grundy.

The bespectacled, child-snatching music teacher of Riverdale High didn't waste any time in getting her grubby paws all over school heartthrob Archie Andrews. It was to be her undoing, however, leading to [SPOILER ALERT] her 'real' identity being exposed once Betty and Veronica got suspicious and went sleuthing around her car and found a fake identity card...and a gun *gulps*

Miss Grundy has now run away from Riverdale quicker than you can say 'statutory rape' but there are still plenty of haters on the internet that are majorly pissed about her relations with our ginger prince.

1. Let's start by acknowledging Archie must take his share of the blame.

archie: *knows that what he's doing with miss grundy is wrong*
betty:*tells archie it's wrong and illegal*
archie:#Riverdale pic.twitter.com/1PGaWEIs3u

3. Miss Grundy is certainly up there with the worst of them.

Jughead at the funeral of Miss Grundy: pic.twitter.com/5BXwYmM9ID

7. A little much but we appreciate the sentiment.

Every time i see ms grundy or betty's mom...#riverdale pic.twitter.com/DUJVX1EBYM

when they ask ms grundy how many underage boys shes slept with pic.twitter.com/uVPczcp2sO

9. Even #SaltBae is disgusted by Miss Grundy.

10. At last we can now get a comfy nights sleep.

my otp is miss grundy and a jail cell

13. Now we can get on with the most important relationship on the show.