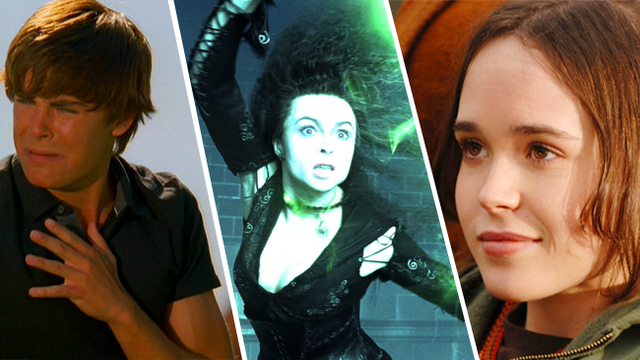 Have you recovered from our list of songs turning 10 in 2017 this year yet? Good, because we're about to throw a bunch of movies at you that will all be levelling up into double digits. We remember seeing the majority of the movies in the cinema - how can they possibly be 10 years old already!? Prepare to feel old!

Is it still a classic? Well, seeing as this is the best Pixar film to ever have been made, the answer is a definitive OUI.

Is it still a classic? We mean, it's no Shrek 2 but with a cast list that includes Justin Timberlake, Amy Poehler and Maya Rudolph, we'll give it a pass this time. Better than Shrek Forever After anyway. And we can't forget the big role that was handed to Dragon in this movie - the true star.

3) Harry Potter & The Order of The Phoenix

Is it still a classic? Every Harry Potter film will be considered a classic, that's a given but Order Of The Phoenix set up so much drama for the movies that succeeded it. Voldemort was a fully fledged physical form, Death Eaters were back in business, Dumbledore's Army was recalled... In honour of Sirius' memory, we deem this movie a classic.

Is it still a classic? Absolutely. From the animation to the musical numbers, Enchanted is a truly overlooked gem in the Disney vault. Thank Walt that we're finally getting a sequel to this masterpiece.

Is it still a classic? Shia LaBeouf stars in a movie about robot cars one time and suddenly we've taken a pretty deep interest in the auto industry. Despite being considered a flop, it's not as bad as the sequels that followed it.

Is it still a classic? 2007 was a real moment for Shia, wasn't it? Disturbia was high-key too intense for us to enjoy the first time around but it just doesn't hold up ten years later. But it's nice to have a lil' Shia throwback every now and then.

7) Pirates Of The Caribbean: At World's End

Is it still a classic? No. And it never was. Not even sweaty, long-haired, tanned Orlando Bloom in a half open shirt and bandana could save this one from being crap. (And yet we'll still scramble to watch it whenever we spot it on Netflix.)

Is it still a classic? Sweeney Todd is like Marmite for a lot of people. You either loved it or you hated it. But you can't argue that Tim Burton's direction, aesthetic and casting skills really turned UP in this movie though.

Is it still a classic? Emo Peter Parker. It's a no from us.

Is it still a classic? 100%. Still as magical as the first 4 times we saw it in the cinema. Also, Stardust has the most spectacular cast list of the year by far.

Is it still a classic? It's still weird to believe that a small indie movie like Juno has such a fierce cult following. It's worth noting that this movie sparked our girl crush on Ellen Page too so, yeah, it's a classic.

Is it still a classic? Would you be mad if we said we literally haven't watched this film since it came out? Oh, you too? Cool.

Is it still a classic? MCLOVIN IS TIMELESS!

Is it still a classic? This movie had everything - teenage heartthrobs, uplifting dance numbers, big voice ballads, John Travolta in drag. Hairspray was the movie that got us back into the musical genre and thirsty for more.

15) National Treasure: The Book Of Secrets

Is it still a classic? National Treasure 2 is like National Treasure 1 on speed. If you thought stealing the Declaration Of Independence was a thrill, just wait until Ben kidnaps the President. When can we expect the real life sequel?

Is it a classic? The movie could have just been an hour and a half of Zac Efron performing 'Bet On It' and it would STILL hold up against the other two movies. We still wish we could have summers as wild as Troy at Lava Springs.

Is it still a classic? Stupid question. Of course it is.