Who will emerge with the most WTF TV cameo of all time?!

After Lady Gaga enjoyed some *KILLER* success on American Horror Story: Hotel, we decided to take another look back at all of the wonderful and wacky cameo appearances by your fave musicians on your fave TV shows... but who will emerge as the most WTF cameo of all time?!

12) Ginuwine on Parks And Recreation

Ginuwine's seminal performance as himself (aka Donna's famous cousin) on Parks was a long time coming. And as we all know, "Pony" was actually written as an ode to the dearly missed, Lil' Sebastian.
WTF Factor: 0/10. Because it made COMPLETE sense and it was one of the best cameos of all time.
Emmy worthy? 100%.

Nick has already proved his sublime acting chops in the iconic Camp Rock so it felt like Scream Queens was just a walk in the park, tbh. He played Dickie Dollar Scholar, Boone who liked to play golf and wear tight polo shirts.
WTF Factor: 1/10. It was expected. And it made a hella more sense than Ariana Grande’s turn as Chanel Number 2. We'll leave it at that.
Emmy worthy? Mmmmmm not today, Satan.

You probably missed Demi's guest spot on Grey's Anatomy because honestly, who was paying attention to anything on that show on Season 6?! Demi played a patient wrongly diagnosed with paranoid schizophrenia and she was actually kinda good.
WTF Factor: 2.5/10 - Kind of made sense for Demi to play this character due to her activity on the Mental Health Awareness scene.
Emmy worthy? Actually, this is probably the most credible performance on the list. But like anyone is gonna give Grey's Anatomy an Emmy these days! 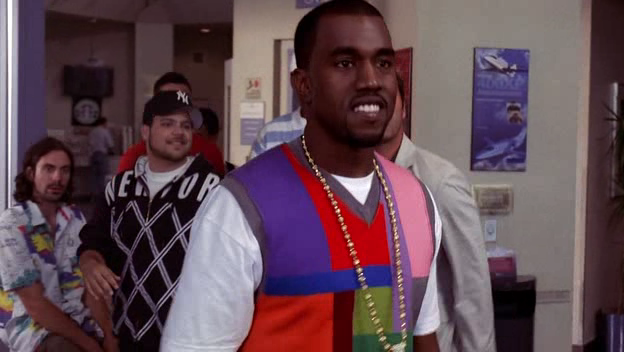 Kanye plays himself (obvz) and he lets the Entourage boys join him on a flight across the Atlantic. It's a rare glimpse of the real Kanye, the old Kanye, the full of banter Kanye that would definitely let us jump on his private jet to fly to Cannes at a moments notice Kanye.
WTF Factor: 3/10 - remember when Cool Kanye used to do fun things like this and wear colour block sweater vests? Current day Kanye could never.
Emmy worthy? Maybe like... a People's Choice Award or something?!

8) Usher on Sabrina The Teenage Witch

Usher played the Love Doctor, a sultry piano playing relationship guru who breaks out into song in the middle of Sabrina's relationship counselling session. When can we buy it on iTunes tho?
WTF Factor: 4/10 - honestly one of the most wild things we've ever seen on TV.
Emmy worthy? Teen Choice Award easily.

6) Katy Perry on How I Met Your Mother

She played a delightfully ditzy gullible lady called Honey and it was low key a little bit painful to watch. We're blaming the character... Katy deserved a better acting debut than that!

5) Pete Wentz on One Tree Hill

After performing at TRIC with Fall Out Boy - twice - Pete came back to Tree Hill as a genuine character. In a cabin in the woods. Drinking red wine. Applying eye liner and making pancakes. Yeah, you can read all about it here.
WTF Factor: 7.5/10 - Oh who are we kidding? His whole entire character arc was life changing.
Emmy worthy? Nope. Go home Pete, you’re drunk.

Courtney played exactly who you think she played on Empire - Elle Dallas, a hard rock powerhouse aka herself. She was REALLY great but like... she didn't perform a single rap song so, we kinda felt cheated.
WTF Factor: 8/10 - The Queen of Grunge on a show predominantly about the hip hop industry?! Whaaaaaaaat?!
Emmy worthy? YES. YES. A THOUSAND TIMES YES!

Blink and you'll miss him, Adam played a rather raunchy newlywed in the first episode of Asylum alongside Jenna Dewan Tatum. After making a trip to the abandon asylum to get freaky, he bumps into Bloodyface and it all goes downhill from there.
WTF Factor: 8.5/10 - Like, he literally showed up with no explanation at all and got his arm ripped off after 2.5 seconds. To this day, we’re not really sure what was going on in the first few minutes of Asylum.
Emmy worthy? Not a chance! RIP!

Unless you're a MASSIVE Green Day fan, you will have 100% missed this insane cameo appearance from BJA. He played a stranger who meets Jackie and (SPOILER ALERT] dies after like, 2 minutes.
WTF Factor: 9/10 - First of all, WHO WATCHES NURSE JACKIE?! Second of all… WHY DOES BILLIE JOE ARMSTRONG WATCH NURSE JACKIE?!
Emmy worthy? Yes, for those mind boggling reasons alone. Throw the Golden Globe in there too. He plays dead so well.

Those FOB lads are quite the actors, aren't they?! Smol bb Patrick played a medical technician called Micah who, you guessed it, was the guitarist in a band in his spare timeeeeee! Yaaaay!
WTF Factor: 10/10 - how did he get this job? AND WHY DID HE ONLY APPEAR IN ONE EPISODE? WHERE DID HE GO AFTER THAT?! COME BACK PATRICK. PLZ. WE NEED YOUR MEDICAL TECHNICIAN-ER SKILLS!
Emmy worthy? Deserves an Oscar tbh.

DID WE MISS ANYONE? LET US KNOW!