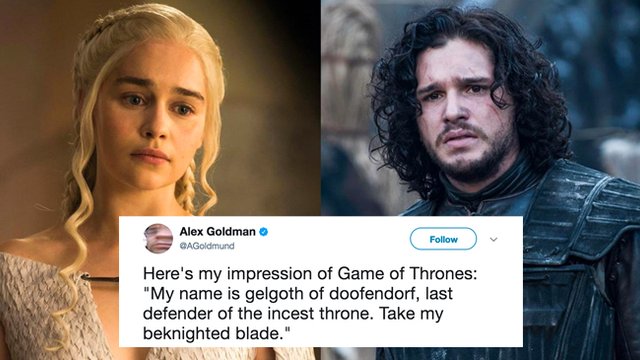 So it's about incest, right?

1. We have some good news if you’ve never watched Game of Thrones. The latest season of the show finished on Monday. You're life can finally return to normality.

2. Meaning you won’t have to tolerate the GoT chatter on Twitter anymore.

When you realize you don't have to hear people talk about Game of Thrones for the next 18 months pic.twitter.com/2hmciowAmL

3. And, even better, it looks like the show won’t be returning till 2019, as the show needs more time to prepare for it’s final season.

5. You’ve probably been very confused by all this talk of whitewalkers, dragons and three-eyed ravens.

Checking Twitter on a Sunday when you've never seen Game of Thrones. pic.twitter.com/9h2gKBisqf

6. But tried to join in with the banter anyway.

Javier: I want to talk Game of Thrones but people dont want spoilers... wonder when it's safe to talk about it. #GameOfThrones pic.twitter.com/zS0Yd2U5wC

8. To be fair, you do have the basics of the show down.

9. No, seriously, what is up with all the incest?

Here's my impression of Game of Thrones: "My name is gelgoth of doofendorf, last defender of the incest throne. Take my beknighted blade."

11. When push comes to shove, you're more of a Leslie Knope than a Cersei.

Leslie Knope is me when people talk about Game of Thrones pic.twitter.com/9Q39WzadY1

12. When people ask you about Tormund's apparent death in the season finale.

We get it, people who don't watch Game of Thrones, you're intellectually superior or whatever. pic.twitter.com/HpsY58fzXO

14. When you're not a fan of GoT, you're completely outcasted from society. No one seems to 'get' you.

15. But, as my mother always told me, it takes strength not to follow the crowd.

them: winter is coming