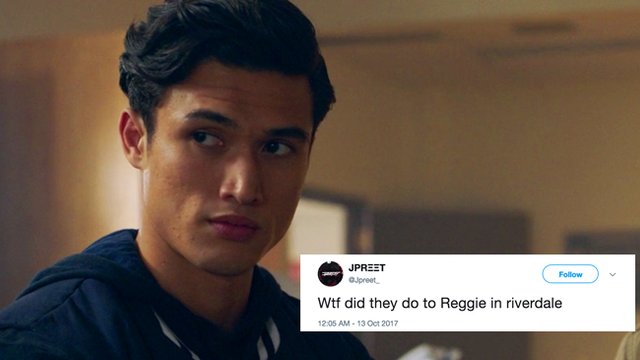 Some people are very angry about new Reggie.

Riverdale returned to our screens yesterday and fans caught their first glimpse of Charles Melton as Archie's rival, Reggie. He replaces Ross Butler, who left the show to focus on his other Netflix show 13 Reasons Why.

New Reggie was only on screen for one short scene but it was enough to whet our appetite. I mean, that eyebrow raise alone deserve an Emmy.

But some people, who we can only assume live under a rock, didn't know that Reggie had been recast and they got quite the surprise when they tuned in to season two.

Riverdale recasted Reggie what the fuck

Do we really have to go through this again?

Finally watched riverdale hehe but why they changed reggie though

No, Reggie hasn't got plastic surgery over the summer.

Jessica, please pay attention. They announced this months ago, sweetie.

Did they get a new actor to play Reggie??? #Riverdale

Wait they got a new Reggie? Did they not think we’d notice? #RiverdaleSeason2 #riverdale

At this rate the show will actually have to rename the character 'new Reggie'.

HE'S RIGHT THERE FFS WHY WON'T THEY LET REGGIE LIVE?

Cutie on the left who is you? where's Reggie though? finally watched #Riverdale stoked for the rest of this season pic.twitter.com/36fwDZYu03

Please do not compare him to the old Reggie .. I’m upset

Wtf did they do to Reggie in riverdale

Ross Butler, look what you have done.

How could Riverdale replace Reggie

Ok one more, it's too funny!

Y'all I'm mad that they just replaced reggie and think nobody will notice. #RiverdaleSeason2 #riverdale pic.twitter.com/3qvEH7BxK3

Don't worry new Reggie, we thought you did great! Can't wait to see some locker room scenes between you Archie.