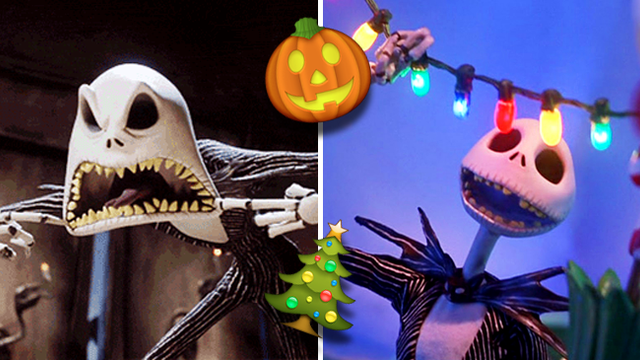 Time to settle this debate once and for all!

SPOOKY SEASON IS HERE, FRIENDS! But before we all head out to the house parties in our Stranger Things costumes, It's time to dust off your Halloween DVD collection and finally get to the bottom of the age old question that haunts our dreams every single year.

Is The Nightmare Before Christmas a Halloween movie, or a Christmas movie?

Here at PopBuzz HQ, we've got a lot of opinions about the true purpose of the movie and things are getting a little tense. In fact, there's already been a fist fight. We've presented to you the arguments for and against, and it will be up to YOU to decide once and for all. Shall we examine the evidence?

Is it a Halloween film?

OK, so, all the hard evidence points to Halloween. The entire film is about the most famous guy in Halloween Town which takes place in the build up to ~Halloween~. It's about Halloween and people from the town who live the spooky aesthetic 24/7. All the merchandise is geared toward Halloween; the movie was basically made so you would have a fail safe Halloween costume to fall back on in case your friends bailed on the squad plans. At the end of the gig, Jack has had his little Christmas fling and eventually returns to Halloween Town where it's Halloween every day until the end of time. Halloween. Pumpkins everywhere. Spiders roaming the streets. Oogie Boogie under your bed.

And FYI: Back in 2015, the director of the film was forced to finally "put the speculation to rest"... Apparently, it's a straight up Halloween movie.

Or is it a Christmas film?

THAT BEING SAID! It's a well known FACT that if a film features ANYTHING relating to Christmas, then it is a Christmas film. Bridget Jones' Diary? It's a Christmas film. Die Hard? Christmas movie. Harry Potter and the Philospher's Stone? Bigger Christmas movie than The Santa Clause, ffs. Christmas is ~barely~ a major plot point in those movies and yet here we are, arguing about a film LITERALLY driven by Christmas.

How can you possibly sit down and enjoy this movie as a Halloween film when it's dripping with Christmas spirit? I don't wanna catch Jack/Sally feels on the spookiest night of the year, I wanna catch those feels when I'm wrapped up warm in Christmas themed pyjamas stuffing my face with Jaffa Cakes. It's a Christmas film. It was released AFTER Halloween too. So why are we still arguing? It's done. It's over. Christmas.

What do the rest of PopBuzz team think?

Having not seen the film, I'm going to declare it a Halloween film because... I mean... you can't have skeletons at Christmas, can you? It doesn't make sense! And that's solely what I'm basing it on. And also, I'd rather watch "Muppets Christmas Carol" at Christmas. I haven't got time for any other films. Sorry.

I mean... I've always been of the view that Jack Skellington is for life not just for Christmas. So, I guess I would initially watch it on Halloween. Having said that, if we're counting Die Hard as a Christmas film... And Home Alone as a Christmas film than we can consider this a Christmas film. And f*ck it, Elf too for that matter. What's more Christmassy? An actual town called 'Christmas Town' or just New York with a bit of snow and Christmas lights? Huh?

This is a legit dilemma for me... *thinks for at least 3 minutes* ...whynotboth.gif?

So, you've heard our closing arguments... but what do you think? You've got the final say!