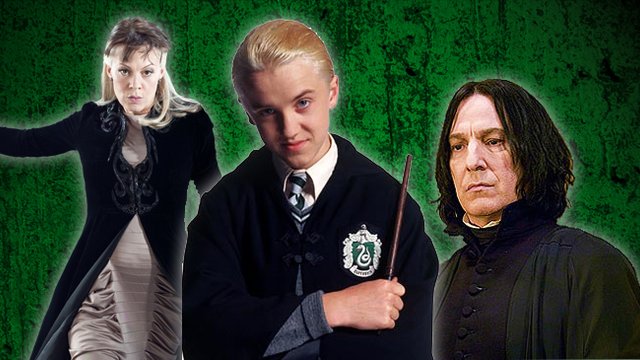 Listen, Slytherin gets a bad rep on the best of days but after this weekend’s recent happenings… it’s only getting worse.

In case you missed it, Donald Trump’s campaign spokesperson tweeted about #PureBloods back in 2012, and she has recently received a delightful zinger from Queen Rowling herself in response.

Death Eaters walk among us. https://t.co/tqKq1anHpf

It's true and it's terrifying. Yes, he projects the same problematic behaviour as Lord Voldemort but guess what!? Not all Slytherins are like that! I've been seeing y'all tweeting about us on the sly... putting us down, calling us names. So here I am, a Slytherin of 19 years, serving you a friendly reminder that not everyone in Slytherin is an evil Death Eater.

We have to figure out Trump's horcruxes and destroy them all. Hogwarts' (USA) fate depends on it. Slytherin (GOP) must be stopped.

I always knew I was a Slytherin and Pottermore only confirmed this for me. (I look really great when I wear green, my ambitions are too much to handle and I love the smell of money - LOLjk.) I’m not denying that we haven’t produced our fair share of problematic wizards but come on, you guys... the Death Eaters were a radical group! THE REST OF US DID NOT AND WERE NOT AFFILIATED WITH VOLDEMORT'S BELIEFS IN ANY WAY, SHAPE, OR FORM! So because society has lumped us with Voldetrump, I feel like a bit of damage control needs to happen on behalf of our beloved house. Here goes...

We're Not All Ruthless, Oppressive Monsters. FUN FACT: Your beloved Merlin was a Slytherin. Yep! And as the old Slytherin saying goes, 'Without ambition, there is no accomplishment.' My point is that there were plenty of Slytherins who used their success for the greater good but you wouldn't know about that because Potter and his Gryffindor pals hogged all the limelight. Maybe one day, we'll get to tell our story. One day, my friends.

The majority of us use those so called 'negative' traits to benefit everyone else.

One of the main attributes of a Slytherin - AS YOU ALL KEEP POINTING OUT - is cunning. Precious Cinnamon Roll Narcissa Malfoy used her cunning to out-smart the very evil doers you keep linking us all to. And guess what? Her negative traits ended up saving your precious little Potter. You’re welcome. Don't mention it.

Just gonna leave this here. #SelfPreservationIsNotANegativeTrait. And, yeah... some of us didn't turn up to the Battle of Hogwarts and like, honestly we're really sorry about that, but you know who did show? Horace Slughorn and a bunch of Slytherins who wanted to fight against He-Who-Must-Not-Be-Named. They took one for the team that day. #Fraternity.

And Contrary to popular belief, we don't spend all day in our mansions counting our Galleons.

Seriously, we don't. We're always out hustling in the real world, making a difference. Are you telling me that there’s not a snooty Ravenclaw family somewhere in the countryside surrounded by bars of gold and piles of money? Exactly. We've *ALL* got our flaws, you guys.

Obviously, we should never forget about Slytherin's problematic past but don't let Voldetrump tarnish your perception of the modern day Slytherin. And I suppoooooose if my problematic house means that more people are getting involved in important political debates then carry on, peasants. ;)