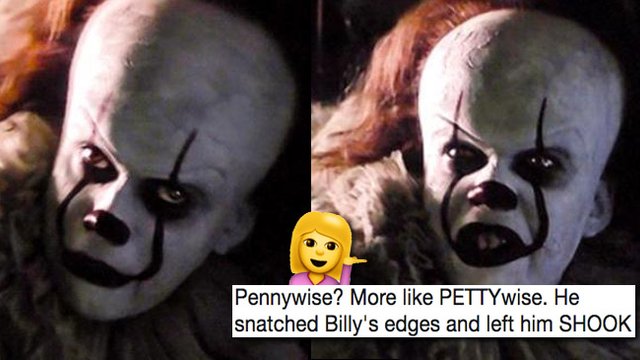 Turns out the dancing clown's most effective way of hurting you is with words.

By now, you will all be well aware of the evil, child-eating, dancing clown known as Pennywise, star of the film It.

Pennywise has clearly become a popular figure in 2017 with Halloween set to be dominated by clown costumes and praise heaped upon Bill Skarsgård's incredible performance and IRL cheekbones (seriously, you could cut cheese on that jawline. Impressive work).

But watch out Pennywise, because there is another even more savage clown coming for your crown hunty...

Oh damn! That is a low blow right there. Somebody call an ambulance for Bill 'cos he just got a serious BURRRNNN.

Turns out a lot of people have noticed the rise of Pettywise and, honestly, they are kinda here for it:

Pennywise? More like PETTYwise. He snatched Billy's edges and left him SHOOK pic.twitter.com/NYyUZNHAgN

I should start calling people Pettywise, since you're all clowns...

pennywise? more like pettywise, i'm here to be shady hoe

A real messy bitch who lives for the drama.

So, with the sequel apparently on the way in 2019, maybe we could have a subplot where Pennywise takes on Pettywise in a lip sync for your life? Come on, you know it makes sense.

It is in cinemas worldwide now. A sequel, tentatively titled It: Chapter Two is rumoured for release in 2019.