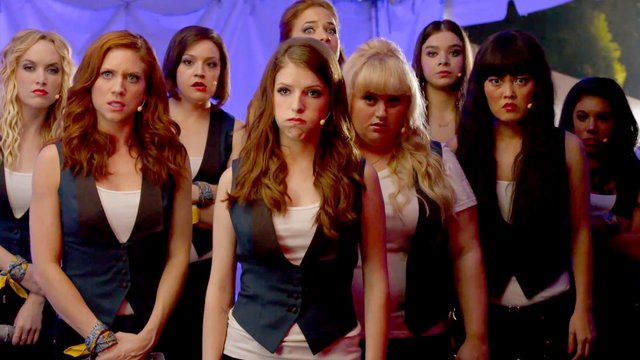 As the first trailer finally drops, we need some answers about the grand return of the Bellas.

The long-awaited trailer for the third (and final?) installment of the all-singing, no-instruments Pitch Perfect series dropped over the weekend much to the excitement of Fat Amy fans everywhere.

Always in favour of a Pink cover tbh.

But while we are largely just delighted to see The Bellas back in action, we do have a few key questions left unanswered by this first preview that we feel must be addressed before the movie's Christmas-time release date.

So, if the studio could back to us asap with answers to the following that would be great:

1) How does whatever local TV station employs Eizabeth Banks and John Michael Higgins' acapella commentators have the budget to send them all over the country to track down former college students?

2) Why was Beca fired from her record label job? Did she produce a flop or did Keegan Michael Key just go on a hilarious angry rant that ended in her sacking?

3) Did that song that Emily wrote in the second one that Beca pitched to the label ever get released or anything? And where did it chart if so?

4) What has become of the Treblemakers? Are they spread out all over the country or are they desperately clinging onto minor fame as a group?

5) Is Ben Platt's character Benji still around or did he hit the big time on Broadway as the Tony winning star of Dear Evan Hansen?

6) Are Beca and Jesse still a thing or were they just college sweethearts? We were heavily invested in this relationship and if it's done, we will need closure.

7) Are Amy and Bumper still a thing or were they just college sweethearts? We were heavily invested in this relationship and if it's done, we will need closure.

8) Are Emily and Benji still a thing or were they just college sweethearts? We were heavily invested in this relationship and if it's done, we will need closure.

9) How does Aubrey get all this time off work from the Lodge of Fallen Leaves to just f*ck around on tour? Who is covering her shifts?

10) How does the scoring system work in this competition if it is acapella groups vs real bands? Surely there's gotta be some kind of handicap system going on here right? Otherwise it's just not fair dammit.

11) Will the greatest acapella group of all time, the Green Bay Packers, be making a return appearance?

13) What hair stylist works with Ruby Rose and her bandmates and are they available for weddings, bar mitzvahs and/or kids parties?

14) Wikipedia tells us that DJ Khaled is involved and we need details, the most important one being is the legendary Asahd also in the movie?

Answers on a postcard to the PopBuzz London office as quick as you can please Universal Pictures.