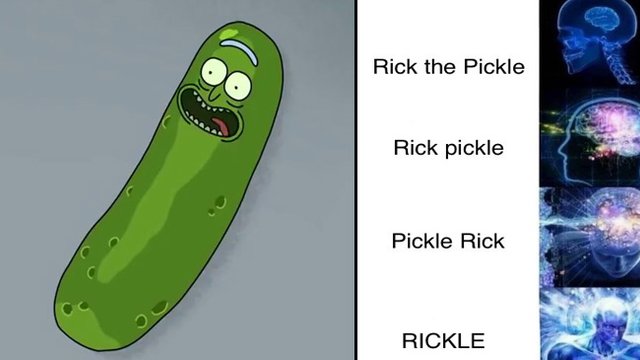 Rick & Morty fans will already be aware of the multitude of ridiculous characters the pair have encountered across their travels. But in this week's episode, the audience was introduced to maybe the weirdest one yet.

We are talking, of course, about Pickle Rick.

Yes, Rick managed to turn himself into a pickle and, basically, things got surprisingly dark incredibly quickly...

Fans of the show have not only gone wild for the character onscreen, they have taken to the internet and shown their love in all manner of meme-related ways. Here are just a few of our fave online reactions to the mighty Pickle Rick:

1) The Walking Dead decided to indulge in some cross-promotion:

Now that we live in a world where Pickle Rick from #RickAndMorty exists, we made this exist: pic.twitter.com/nuCrxdfRQU

2) Does it taste of cake or pickles though?

Wow, Pickle Rick. My girls would love it. In fact, the first sentence Caroline ever said was "I like Pickle Rick" pic.twitter.com/ri8M3bKCED

4) Someone needs to make this into a real Snapchat filter asap.

5) This craft beer came with a sneaky hidden shoutout:

Let's have some fun in honour of @rickandmorty Pickle Rick. let's put him in all types of movie posters and tag #imapickleposter I'll start pic.twitter.com/SP6saQpOjM

7) Somebody send this guy a vat of schezuchan sauce. He deserves it:

Yo @adultswim @RickandMorty my cousin got a Pickle Rick tattoo for your season 3 premiere #RickandMorty #picklerick pic.twitter.com/Rldbpandmb

We sold a pickle tonight signed by the cast of Rick and Morty for $100. pic.twitter.com/Hy3KoCaU5J

10) Is it even a meme until Spongebob gets involved?

Not Sure if Anyone Thought of these yet, but...I'm Pickle Rick! #PickleRick #RickAndMorty #AdultSwim #Spongebob #Nick pic.twitter.com/FFjP3VGqUf

11) Rugrats just got meta too: 15) Will there be a parable at the end of this?