We Sorted Riverdale Characters Into Their Hogwarts Houses Because We're Trash 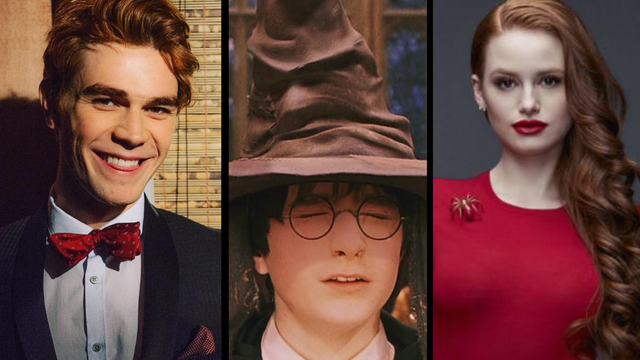 Any show or film about a tight group of friends is always going to give us Harry Potter feels. Because we've been watching Riverdale religiously, we couldn't stop ourselves from sorting our faves into their rightful houses.

Archie displays some major Gryffindor tendencies. First of all, he's got red hair. Secondly, he's chivalrous, brave, and a noble™. He may not be the sharpest tool in the shed, but you can always count on him to be there for his pals. Archie Andrews can also be reckless to a fault. Another infamous Gryffindor trait.

Betty Cooper is an enigma. She is the perfect hybrid of a Ravenclaw, Hufflepuff, and a Gryffindor. She's brave like a Gryffindor, clever like a Ravenclaw, and as wide-eyed and forgiving as Hufflepuff. Now, black wig Betty? She's a Slytherin.

Veronica is a Gryffindor for sure. If you notice, Veronica is always armed and ready with a plan. Most of the time her plans involve helping a friend or even protecting a frenemy (see: Cheryl). Despite being something of a downgraded Queen Bee, she has a selfless streak that makes her the quintessential Gryffindor.

Cheryl is a Slytherin for one simple reason. Despite her many redeeming qualities, Cheryl is a schemer. Her first instinct is to scheme, seek revenge, and come through with a snide remark. She's not a bad person (and would probably stop just shy of becoming a Death Eater), but she usually realizes she's done something wrong when it's too late. Very Slytherin.

Jughead - Ravenclaw with a dash of Gryffindor

Jughead is like a Ravenclaw cocktail with a Gryffindor lemon slice. You can always catch him on his laptop (putting in light work as our narrator). He's creative, a quick thinker, and uses his wit to solve problems. His Gryffindor side comes through when you realize all the wild mess he gets involved in just to help Betty find Polly. If that ain't a Gryffindor...

Polly is a Hufflepuff through and through. She patiently waited for Jason to retrieve her from The Sisters of Quiet Mercy, after weeks of not hearing anything from him. She forgave her parents for being shady, forgave Cheryl's parents for being shady, and went to go live with the Blossoms. She is just so terrifically naive, she couldn't be anything other than a Hufflepuff