There's A Riverdale Dance Scene And The Memes Are Incredible 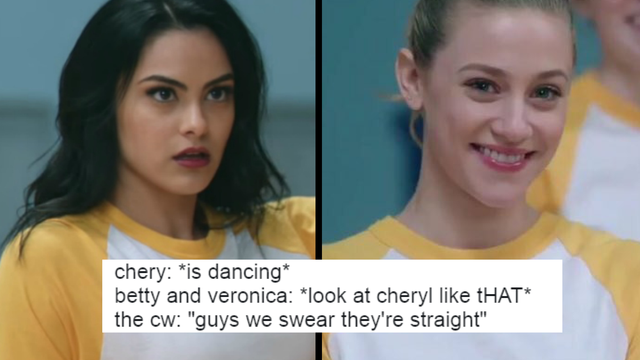 Riverdale is constantly coming at us with the ships, the red hair, and the slightly sinister mood music. One thing that ISN'T sinister, is the dance scene that Riverdale has unveiled and, honestly, je suis shook.

Madelaine Petsch even posted a behind the scenes video of the pair rehearsing for the big scene.

Here's a lil bts video rehearsing the Cheronica dance off from this Thursday's episode of #Riverdale don't forget to tune in 9/8c pic.twitter.com/WdCdKRgdsO

Well, it should come as no surprise that the memes are here and extremely pressed about the dynamics

People think there is no heterosexual reason for Betty's reaction.

there's no heterosexual explanation for the way betty cooper is looking at veronica lodge while she is dancing pic.twitter.com/4ksRXWsvPP

@CamilaMendes IM A HOMOSEXUAL HAVING A PANIC ATTACK

chery: *is dancing*
betty and veronica: *look at cheryl like tHAT*
the cw: "guys we swear they're straight" #Riverdale @CW_Riverdale pic.twitter.com/H7iCSwux3f

And it turns out this fits into a lot of different scenarios.

*game of thrones theme song comes on*
friend: dont do it...
me: pic.twitter.com/mMsYH82Q8i

If we all call the museum of modern art, I think we can make this an entire exhibit.

camila and madelaine dancing to work from home pic.twitter.com/7O7M7SwdCt

the only good thing that came out of that video is Betty's face when Veronica was dancing vs when Cheryl was dancing thank you pic.twitter.com/kJabCgR4Lm

Thankfully, Betty's face has been transcribed for posterity.

Even RuPaul had to get in on the action.