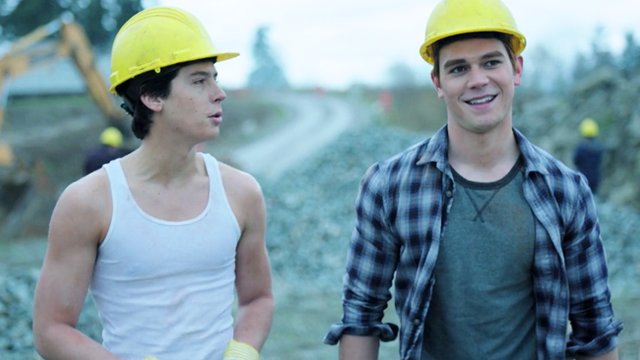 The thirst is real.

By now we're sure you've caught up with the latest happenings down in Riverdale and you're probably still in a state of shook after everything that went down.

After a two week break, the show returned in typically dramatic fashion with Polly's baby shower taking an ugly turn, while Archie went on a badly-planned rampage through Serpent territory (why is he like this?). Most fans, however, were distracted by something else, namely Cole Sprouse's arms.

Archie, Jughead and co. came to the rescue of Fred, Archie's father, after all of his construction workers with poached by Cliff Blossom, leaving him zero worker to get started on the development on the former Twilight-Drive In site. Despite his love for the Twilight, Jughead helps Fred and Archie get started on the site and his choice of outfit, a plain white vest, left fans hella thirsty.

Sun's out, guns out, amirite?!

Thank god those other construction workers pulled out or we would *never* have had this scene. Imagine how tragic that would be?

Judging by the lack of dirt on his top, we're guessing Jughead wasn't the most helpful person on the site.

He literally could be in an advert for Tide or Persil.

*Hums to the tune of YMCA* 'It's fun to drink coffee at Pop's Chock'lit Shoppe!'

Shame Archie didn't dress up as the Sailor.

Don't worry Archie, no one will forget your outstanding contributions to thirst.

Fans obviously went wild for it.

jughead's arms and existence that is all #Riverdale

I'm thankful for a new episode of Riverdale today because Jughead's arms saved my life.

Give the people what they want.

no ok but look at cole's arms? like honestly? why doesn't jughead hide under this buggy shirts?? SHOW UR BICEPS BOI pic.twitter.com/lhPFPkPI8M

It's all in the job description, hun.

Is Jughead's job on the construction site supposed to be wandering around after Archie dressed in a tiny tank top & bare arms? #Riverdale

But the question is, did the scene remind you of anything? Perhaps, a certain music video that involved diggers and DIY? Hmmm...