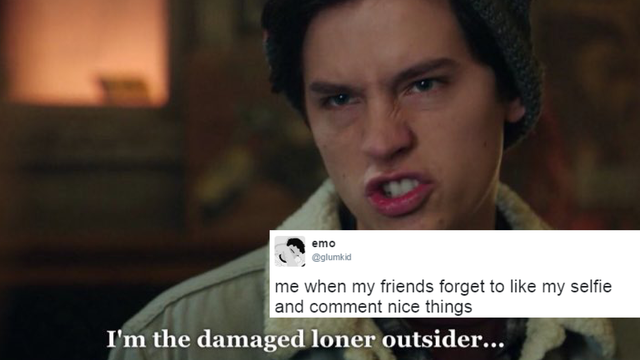 Let's face it. Riverdale's Jughead Jones can be a little Avril Lavigne circa 2003. It's not his fault. He's just...weird.

Following Jughead's "I'm weird" speech in Season 1 episode 10's "The Lost Weekend", the internet has done what it does best and slam dunked the heck out of this meme.

1) Please no one teach Jughead how to sing or play an instrument.

4) Have you ever seen me without this stupid hat on?

I'm weird. I'm a weirdo. I don't fit in, and I don't wanna fit in. Have you ever seen me without this stupid hat on? That's weird. pic.twitter.com/m2X8k6sSsN

I'm still confused that Jughead made a whole speech about being weird because he keeps his hat on just... take it off

6) Some people are starting to question whether or not Jughead is actually...weird.

me: sees absolutely no evidence that he is weird, like at all

*listens to twenty one pilots once* pic.twitter.com/XrSTKV7t0G

11) When you want to make sure you're clear about your sexuality.