All The Parents On 'Riverdale' Are Awful And This Is Why 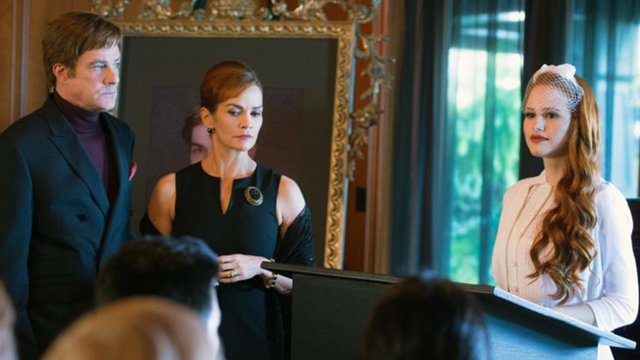 It's official: we hate all the parents on Riverdale.

We can’t have been the only ones that developed a new found sense of sympathy for Cheryl Blossom after the latest episode of Riverdale.

The self-centred, manipulative head cheer-leader had so far proved herself to be the most annoying and dislikeable character on the show and, to a certain extent, this is still true. But the reasons why she is like this became apparent as the relationship between herself and her parents was revealed. In particular, her terrifying mother Penelope Blossom, who makes Cruella de Ville look like Oprah Winfrey.

[WARNING: Major spoilers about to go down if you haven’t watched episode 5 yet].

In “Heart of Darkness”, we discovered how Cheryl is subjected to a constant stream of scalding insults and abuse from her mother, which her father, Cliff, silently endorses. After Cheryl’s dramatic entrance at her brother’s funeral, in the white dress she wore the day he went missing, making an emotional speech against the wishes of her parents, Penelope corners Cheryl in her room and threatens to send her to boarding school.

It’s another dark turn in a show where the parents have quickly become the villains. It epitomises that classic line in Phillip Larkin’s poem ‘This Be The Verse’: “They fuck you up, your mum and dad. They may not mean to, but they do”.

Coming a very close second to Penelope and Cliff Blossom in the ‘most hated parents’ stakes are Alice and Hal Cooper. Like Cheryl, it’s Betty’s matriarchal mother who is the most damning, constantly trying to control her daughter. Unlike Cheryl, Betty is becoming increasingly adept at defying her and keeping her independence. This, in our opinion, makes good-girl Betty one of the most badass characters on the show.

Veronica isn’t much better off either. Her father is a convicted criminal with very dodgy business dealings and her mum, Hermione, despite her best intentions for her daughter, constantly lies and withholds information to Veronica. Then there is poor Jughead, who’s father doesn’t seem to care that his son is homeless, making him the worst of the worst. Which leaves Archie’s dad, Fred. He’s not perfect (for example the way he handled his son’s fledgling interest in music was absurd) but he’s definitely the best of a bad bunch.

So why are the parents of Riverdale so goddamn awful? While there is some mirroring of the children and parent’s lives (for example, Archie’s dad and Veronica’s mum confusing relationship mirrors that of Archie and Veronica themselves), the kids of the show are much more supportive of each other. Look at the way Veronica is willing to help Cheryl despite her prior shitty behaviour as just one example of the forgiveness that they’re willing to demonstrate. The adults, however, seem much more focused on settling old scores or pursuing petty feuds, criminal activities or their own selfish agenda.

In some ways, the rift between the parents on Riverdale and their children could be read as a reflection of the much discussed divide between the baby boomers and millennials in real life. Millennials, broadly those between the ages of 18-34, are often described as self-centred, over-sensitive ‘snowflakes’, more interested in social media than doing anything productive. They are routinely mocked by baby boomers, who have become the pantomime villains of the world, a whole generation who have ruined everything. For all the nonsense that is written about both generations, we think it’s fair to say there are definitely “communication problems”, and Riverdale plays heavily on that. The parents don't understand their children and the children sure as hell don't understand their parents.

Will the families of Riverdale be able to bridge this generation divide? God knows. Though, at the moment, finding out who killed Jason Blossom definitely seems like the easier task.