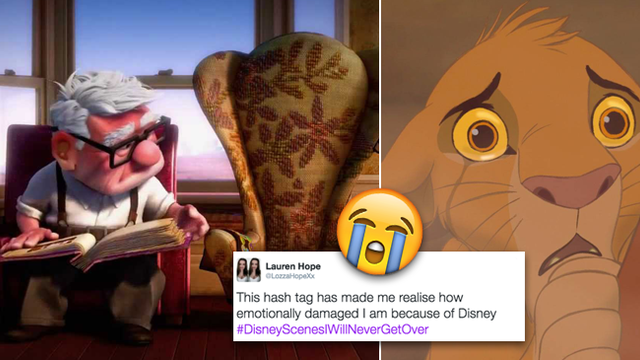 I don't remember signing a permission slip for this feels trip.

This week (Dec 6.) Twitter decided to start sharing their saddest Disney moments under the hashtag #DisneyScenesIWillNeverGetOver. Clicking on that hashtag was the worst idea we've ever had. Within seconds, we were transported back to the death of Mufasa, and Bambi's mum... Ugh, it all got a bit too much so now we're gonna inflict the pain on you.

Here's fourteen of the saddest Disney scenes that will forever be etched into our brain:

We still haven't recovered from the moment Dumbo's mum scooped up her lil' baby elephant with her trunk and started singing 'Baby Mine'. The tears start flowing harder when she's forced to let her baby go and resume her position locked up in her own personal jail. We've been crying since 1942.

Literally 10 minutes into Up! and it's game over. Every time we even THINK about the montage of Carl and Ellie's tragic life, we start to cry. Embedding this gif has actually tipped us over the edge. We're a wreck.

Too soon to talk about this one. It came out 75 years ago but, yeah... it's still too soon.

Ok, this moment was made even more traumatic thanks to the even sadder chain of events that preceded it; Mike piecing together Boo's shredded door, the light going on, Sully bidding farewell to his tiny friend and disappearing behind the door. Then Boo opened the door... and her poor little face dropped. WE'RE DONE.

Despite crying the ENTIRE way through Inside Out (thanks Sadness), we've never sobbed so hard in our lives when Joy had to leave Bing Bong in the memory dump. Why did he have to vanish? WHY?

We all knew what it meant when Baymax he said "Are you satisfied with your care?"... It's been two years and the tears still seep from our eyes on the daily.

It was inevitable, wasn't it? Andy moving to college. And we all know what happens to everyone's old childhood toys when they leave home. We all saw it coming and yet it was the hardest we've ever cried in our adult lives.

Our first memory of what true heartbreak looks like. Gabriella breaking up with Troye in the summer of 2007. The lyrics of 'Gotta Go My Own Way' hitting home, tears full of regret... Every time we re-watch HSM2, we still have a little sob to ourselves.

Maybe we were too young to really catch feels when Jessie got abandoned by her owner but when you re-watch Toy Story 2 as an adult you'll find yourselves catching a few feels as our fave cowgirl stares out the window at what could have been.

We always forget that Finding Nemo started off with one of the most tragic storylines in the history of Disney storylines. Nemo's mum died protecting her babies and only one survived. Mate... we can barely type through the tears.

When Tod gets abandoned in the woods by Widow Tweed... we can't. The look she gives him when she drives off? TOO MUCH. We actually haven't watched that film ever again. Emotionally damaged.

We've never known true terror until we saw this scene. But what really tipped us over the edge was the moment they all seemed to give up and accept their fate. :(

Aladdin and Genie's goodbye was already sad enough. But it's been made even sadder with the passing of everyone's childhood cartoon hero Robin Williams.

Never mention this scene in our presence ever again. Ok? Ok. Now get out.