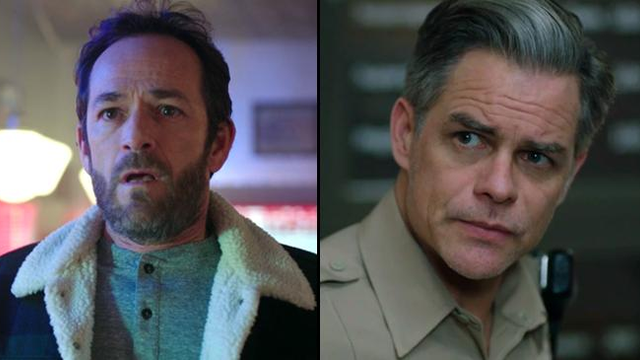 Sheriff Clueless, back at it again.

The investigation of Fred Andrews' shooting on Riverdale has been a sh*t show from start to finish and we're not the only ones who think it.

Considering that it took five high school students and one very attractive Southside Serpent to figure out how Jason Blossom died before a group of professional detectives did, it is now a known fact that Sheriff Keller can't be trusted and in the first episode of season two, he proved it.

We decided to do our own sleuth on the situation, a sleuth to sleuth how terribly Sheriff Keller has been sleuthing. So strap in because we're about to lay down an entire episode of CSI: Riverdale right in front of your very eyes.

1) The Diner should be a crime scene.

Fred is shot in the fairly early hours of the morning. By the time Betty and Jughead walk into Pop's, it's early afternoon, at least. Apparently, the police have been and gone but there's still a pool of Fred's blood left on the floor and he's been left to clean up himself (...someone call Dexter Morgan immediately.) Nothing had been taped or cordoned off. Pop didn't mention anything about them asking for or taking evidence either. RED FLAG, MATE.

Sheriff Keller tells Archie that it's "too early" to speculate over who shot his dad but like, it actually wouldn't be "too early" if they had ACTUALLY investigated the crime scene properly. Was any evidence even taken? Did they dust for finger prints? Check for foot prints, shoe size, type of shoe? Tire tracks on the road or the dirt? I've seen CSI, I don't care how small your police department is, Sheriff.

3) Pop himself should be evidence.

The gun man wasn't wearing gloves and he had Pop by the scruff of his uniform. Keller reveals that Pop relayed the events up until Fred was shot so if he told him that the gun man actually touched him, why isn't his uniform being tested for prints and DNA?!

4) Fred's clothes should be used as evidence.

If Fred's wallet is missing, then the shooter must have touched his clothes to get it from his pocket too, right? Handing his personal effects back to Archie to run through the washing machine is not ideal.

5) Archie and Pop should have some kind of police protection.

As the two sole witnesses, they should probably have some kind of protection, don't you think? What's to say that the gun man won't show up to kill them?

6) Why isn't there any police presence surrounding Pop's?

If he didn't take any money from the register, as Pop reveals later to Betty and Jughead, what's to say he won't return to get it later? Previously, when Jughead asks the Sheriff how much money was taken from Pop's, Keller said he didn't know. Great bit of investigating there, Clueless. Without that lil' bit of information, it changes his entire motive.

7) Why isn't there any police presence at the hospital either?

Seeing as the gunman didn't take anything from the cash register at Pop's, it's pretty clear that his only motive was to shoot and kill Fred Andrews - but Sheriff Clueless doesn't know that because he didn't ask. Anyone could have walked into that hospital to finished off Fred.... Cheryl even waltzed in there without any permission to plant a smacker on his forehead, for Christ's sake!

8) More feds showed up for Clifford's dead body than an actual gunman on the loose.

Honestly, when Clifford Blossom hung himself (or did he?), every cop car in America showed up at the barn at Thornhill. There's LITERALLY a gunman on the loose. Where's the rest of the squad? Why aren't the streets teaming with cops? This ~is~ the same town that just went through the murder of a 16-year-old boy after all...

9) The town should low-key be on lockdown.

Hellooooooooooo, how many times do we have to repeat ourselves... THERE IS A GUNMAN ROAMING THE STREETS!

10) The suspect line-up was a complete waste of time.

The one main piece of information Archie recalled about the identity of the gunman was that he had distinctive green eyes. And then Clueless goes and gets five guys who do not even have green eyes in the line up.

11) More to the point, where did he get five guys who matched Archie's description so quickly?

Riverdale is a small town. So where the HELL did he get those five guys so quickly and where did he get those black ski masks from? Did he actually go out and buy them? Are they from his own personal collection? Were the suspects asked to bring their own?

12) If they had taken finger prints, they also could have eliminated the whole process.

13) Is there absolutely NO CCTV footage in Riverdale at all?

There's only one reason for all this mess, and it's not just because Sheriff Clueless is incompetent at his job... maybe he's the killer himself? Somebody get Alice Cooper on the landline, we've got an exposé to write.

QUIZ: Only a Who can score 100% on this The Grinch quiz