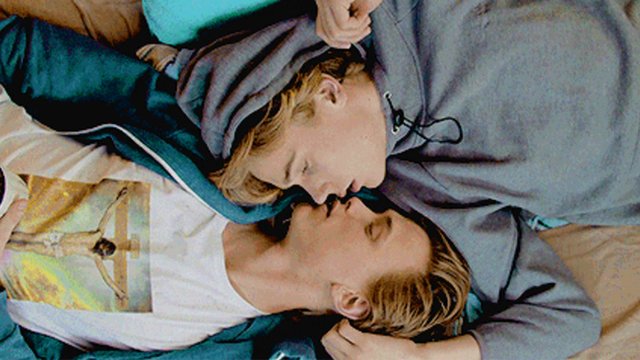 All aboard the Evak ship.

If you've been watching Skam, the "Norwegian Skins", then theirs a good chance you've been salivating over the scenes between Isak and Even. If you haven't been watching, then you will probably start by the end of this post.

Fans have been going wild for Evak on Tumblr. So much so, all the top posts on the site tagged with Skam GIFs of them making out. So in honour of that, and the fact that we're feelin' hella thirsty, here's 13 of the greatest Evak make out sessions.

2. Talking of moist, let's take a closer look at that swimming pool scene.

3. We're going to need an underwater shot of that.

I am drenched in moist.

7. They're pretty good as eskimo kisses too.

8. Some people say 'nuzzling' instead of eskimo kisses which doesn't sound quite as cute imo.

9. Even seems more into eskimo kisses than Isak, don't you think?

I mean...why not just nuzzle his whole face, Even? Jeez.

10. Did we mention that they're Norwegian yet?

Well that was nice.