Stranger Things 2: The Funniest Memes From The Latest Season 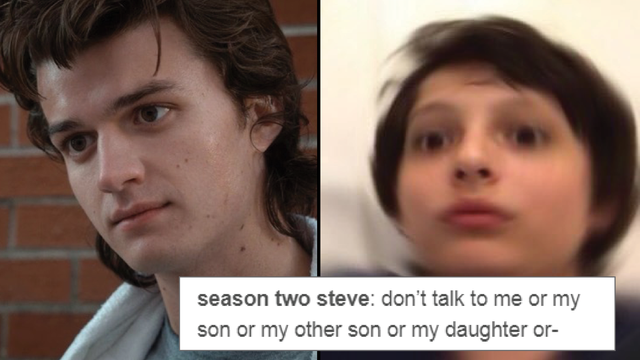 "So, Jonathan. How was the pull-out?"

Netflix's Stranger Things season 2 finally came into our lives and we're still trying to recover. We found out what happened to Eleven, learned the scary truth about Will, and screamed into a pillow every five minutes during episode 9.

Of course, there is no Stranger Things premiere without the instantaneous memes. Here are the funniest jokes and reactions to Stranger Things' hilarious and exciting season 2.

“So Jonathan, how was the pullout?”

name a more iconic duo. i will NOT wait. pic.twitter.com/8Iz0sPGWmH

7) me: *trying to be casual about how lowkey hot Billy is*: This is fine.

me pretending to not have the hots for billy in season two of stranger things pic.twitter.com/4bknREfe8f

Will “He likes it cold” #StrangerThings pic.twitter.com/Jtb5bTDVcC

18) Shout out to Steve: Camp counselor/Dad of season 2

19) And yet, the theme song still profoundly bangs

FINALLY, the most important secret is revealed: how Steve gets his hair like That. #strangerthings

22) Just remember the queen you are, Steve.

when you’re feeling all sad and emotional but then you remember who you are pic.twitter.com/FJsNkthnkb

23) I know it. You know it. Even the Demogorgon knows it.

I think we can all agree who the MVP of #StrangerThings is pic.twitter.com/WqrlK3s2ft

24) Is there a stronger phrase than OTP cause...

imagine these two being THAT couple at hawkins high school during the 60s pic.twitter.com/LMq1kjkJ3o

what’s it with 80’s themed things having a bully, who is blonde, played by an aussie actor, with a mullet? pic.twitter.com/aBMhJC5m6V

26) Steve back at it again with the parenting