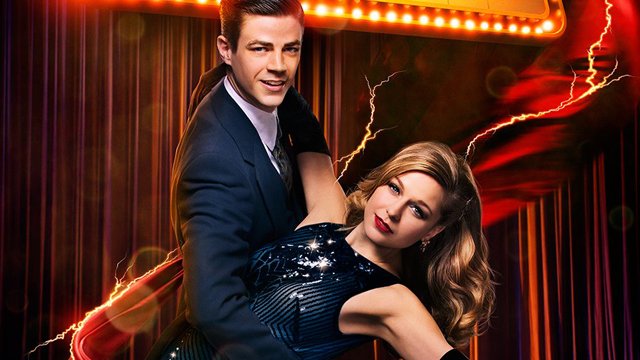 All other screen musicals should step aside - this is how it should be done!

It's the musical everyone is talking about - two star crossed lovers, bonding over a jazz-influenced soundtrack as they navigate their way through a beautifully shot American cityscape, throwing in a few dazzling dance sequences that tip their cap to the golden age of Broadway.

We are of course talking about La La Lan...oh wait, no sorry, we're mistaken.

In fact, the best musical of the year wasn't on the big screen or even in a theatre - it aired as a TV crossover special this week focusing on the famously non musical pairing of Supergirl and The Flash.

So, how did they pull it off? Let's look at a few of the reasons why this idea that, let's be honest, makes no sense on paper, managed to be an absolute triumph.

It shouldn't be such a novelty but isn't it nice when on screen musicals use actors who can actually, you know, sing? Obviously we already knew that Supergirl herself had some serious pipes thanks to Melissa Benoist's previous role on Glee but she is far from alone in having some stagey experience to fall back on. Jeremy Jordan cracks out his best Newsies-level vocals throughout, musical legend John Barrowman brings in a full throated performance and Darren Criss stops by to play the Music Meister with all the swagger we've long been missing since the days of Blaine and the Warblers. Basically, the casting director across both series is clearly a Broadway nerd and it shows.

2) They hired the best composers in the business

You've all watched Crazy Ex-Girlfriend right? Well Rachel Bloom was on hand to write the hilarious, pun-filled track 'Super Friend', a definite highlight that perfectly understands the ridiculousness of the concept while still ensuring a top level of musical quality that doesn't get bogged down in irony.

Plus the La La Land comparison is particularly apt when you learn that the movie's composers Pasek and Paul composed the weepy engagement ballad 'Running Home To You'. Request it at your prom - this is the perfect last dance.

Give the oscar back boys - it's got the wrong song title inscribed on it.

Many TV shows have attempted to mount the much vaunted 'musical episode' from Grey's Anatomy to Scrubs (what is it with hospital shows?). But only one has truly mastered the form and elevated its episode to the level of cult status. Buffy The Vampire Slayer's 'Once More With Feeling' was Josh Whedon's love letter to the musical - this is the man who worshipped at the feet of Disney's animated movie department for years after all - and his knowledge and respect for them pours out of every scene. This was the blueprint for how a TV musical should work and the Supergirl team have clearly been taking notes, from plot structure to song style.

Now, when can we have a musical sequel guys? Seriously.