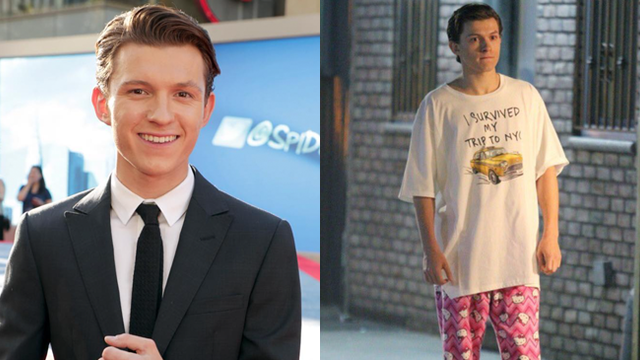 This is hilarious. I can confirm that the rumours are true #spidermanhomecoming

How the Marvel audition definitely went down.

manager: ok tom there's this audition and we want you to-

casting director: so why should we give YOU the spiderman role?? what can you do that the others cant??
tom holland: pic.twitter.com/CpcESXUwJh

*dissociates from the earth*

tom holland walking on a deserted street in his hello kitty pjs looking like he's hardcore dissociating is a Big Mood pic.twitter.com/FZdu6bVNES

Say it louder for the people in the back

When you're chilling and suddenly remember all your responsibilities.

Don’t talk to me or my son ever again.

When you're your own biggest fan.

them: things you probably don't know about actor, tom holland!
also them: first of all he's british

Ever been so clumsy you’ve fallen in a chair without leaving it? Tom can relate.

he fell in the chair omg pic.twitter.com/8vMGLzVWu5

In fact being clumsy is a little known side effect of being bitten by a radioactive spider.

one of the 466257638 reasons why tom holland is a perfect spiderman pic.twitter.com/u7WmFGKrat

Tom is single handedly out here redefining the English language and we’re here for it.

the way tom says "croissant" and how we make fun of it pic.twitter.com/TYjxNPEQGw

When technology gets the best of you.

"and how do i turn this off" yep that's tom holland aka peter parker pic.twitter.com/4tUquONRnH

Even Dustin from Stranger Things knows how it is to be all about that sweet TH life.

sebastian and tom holland on the set of infinity war https://t.co/UlTs0hRk8p

And of course we gotta talk about THE FROG.

Who knew Tom was in another of 2017’s biggest movie smashes?!

Honestly, a gift to gifs

After you realise Tom Holland is basically just a human meme and therefore ur soul mate.

me: i decided not to have boyfri..
tom: hi im tom holland
me: pic.twitter.com/IWHcOlGXEO