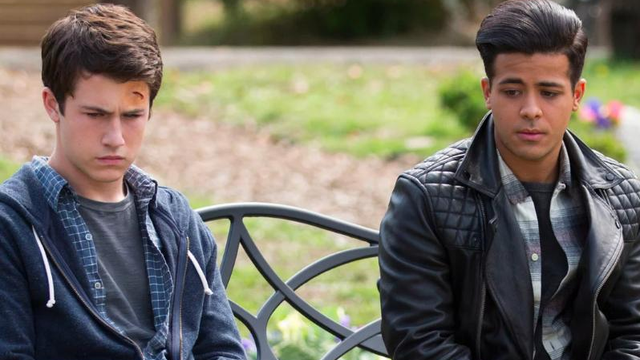 Could there be more to Tony than meets the eye?

Anyone who has seen 13 Reasons Why will likely have a very positive view of Tony. He's there for Hannah and Clay, acts as a lifeline when Clay starts to spiral, and always has a wise thing to say when things get seriously heavy.

But, a new fan theory suggests that Tony might be something other than a good friend of Clay's. Some unique takes are bringing up the possibility that Tony doesn't exist in the same way the other characters "exist".

Let's take a look at the facts, shall we?

Tony looks about 30, he has a bunch of tattoos, and he always seems to appear when Clay is in trouble. He's not like the other kids involved in Hannah's story, and his main function on the show is basically to build up Clay's willpower to continue listening to the tapes. Interesting.

Most people are of the belief that Tony is more of a "guardian angel" figure, but there are a few folks who think that Tony might not actually be a real person at all.

This theory says that Tony is Clay's imaginary friend. E! Online also included it in their roundup of spooky fan theories so it's pretty much hit the mainstream. 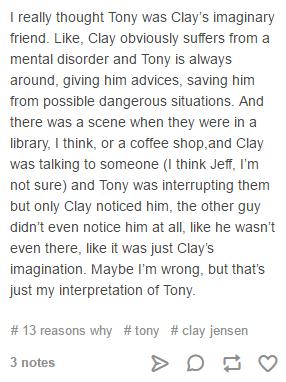 Unfortunately, I'm going to have to depart the "Tony isn't real train" because the theory has some major holes.

Like the fact that Tony used to date Ryan Shaver.

That, and Tony spoke 1 on 1 with Hannah's parents (what would be the function of that if he weren't real?) Tony also fights with some guys over his sister, and has a current boyfriend who Clay meets.

It is compelling to wonder if Tony is more than meets the eye, but this particular theory doesn't exactly hold water.

What do you guys think? Could Tony just be a figment of Clay's imagination? Is he more of a guardian angel?