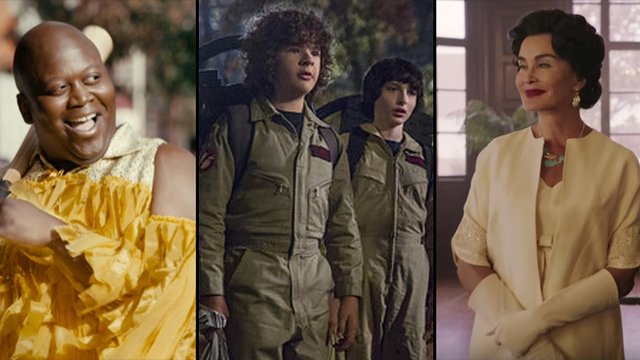 From returning faves to your next binge watch, here are our picks for the upcoming year in TV.

2016 was a truly great year for TV, with returning favourites delivering huge twists and turns and brand new shows keeping us glued to our screens and desperately dodging spoilers. But what about 2017?

Here's just a few of the TV highlights we are looking forward to next year.

The first set pictures have begun to leak as the world's most famous kid actors get back on their bikes and put on some 1980s fashion for season 2. What will be come of Eleven? Will Barb return? And how will they explain Dustin's sudden growth spurt? Expect to find out next Autumn on Netflix.

Vanessa Hudgens stars in this sitcom set in the DC universe, focusing on an insurance claims adjustor frustrated by the constant destruction caused by the local superheroes. Think The Office meets Daredevil and your halfway there. The series premieres in the US on February 2nd on NBC.

If you were a fan of Netflix's Daredevil, you'll be hyped for this spinoff focusing on the show's sort-of-villain, sort-of-hero The Punisher, latest in Marvel's line of dark super TV shows. In fact, Netflix will have a big year with Marvel, The Inhumans and Iron Fist also making their debuts in 2017.

The 1990s revival continues with the return of the classic Disney cartoon with the greatest TV theme song of all time. Plus, the cast contains many of our TV faves including Ben Schwartz, Danny Pudi, Bobby Moynihan and David Tennant to name a few. Catch it on Disney XD next year.

When the second season of the Netflix comedy ended last year, co-creator Tina Fey had implied that we'd be waiting a while for the further adventures of Kimmy. However, a surprise Beyoncé-themed teaser trailer earlier this month announced their grand return on May 19th. But will Titus really remake all of Lemonade?

Community's Alison Brie stars in this 10 episode comedy from Orange Is The New Black creator Jeni Kohan set "in the 1980s as it follows the formation of the all-woman Gorgeous Ladies of Wrestling league". The women were previously the subject of a documentary back in 2012 that gained critical acclaim. Not much else is known yet but with that level of talent on board, you know you'll be watching when it hits Netflix next year.

Adam Pally stars as a lazy college professor, able to transport himself back to the America's revolution via a time travelling duffel bag. Leighton Meester also stars as his girlfriend waiting for him in the past. But has he accidentally caused a change in US history? The pilot looks genuinely hilarious and we can't wait to see the full series when it airs on FOX.

The reunion series First Day Of Camp brought out all of our nostalgia and love for these ridiculous characters, with a cast made up of nearly every comic mind the US has to offer. But what happened to our happy campers next? Netflix will air what is surely going to be the funniest show of 2017.

Unless Ryan Murphy is lying, the theme for the seventh season of the horror anthology is set to be based around the 2016 election. But then again, if Roanoke is any indicator, we may not know the truth until after the first episode airs. Still, the return of AHS is always worth getting excited about and Murphy has also hinted there will be some kind of connection to the Freak Show storyline so there's a little something to keep you on your toes until it airs in September 2017. Let's just hope Evan Peters manages to stay alive a little longer next time...

No word yet on when this may appear but given how strong The People VS OJ Simpson was, we are very excited to see the next chapter in this anthology, said to involve the aftermath of the Hurricane Katrina disaster that tore apart New Orleans. We would also hope that Ryan's habit of keeping the same group of actors in different roles across multiple seasons will stick given the strength of the performances from Cuba Gooding Jr, Sarah Paulson and David Schwimmer to name a few.

Its been a long year without The Doctor in our lives, the annual Christmas special being his only appearance on our screens all year. But thankfully, the BBC will air a full new season in the Spring, the final episodes helmed by showrunner Steven Moffat before he passes the honour over to Broadchurch's Chris Chibnall. Oh, and there's a brand new companion on board too!

Ryan Murphy must just never sleep because he has yet another new series on the way, this time focusing on the infamous Hollywood rivalry of Joan Crawford and Bette Davis with AHS graduate Jessica Lange along for the ride. Check it out March 5th on FX.

Everyone's favourite Norwegian teen web drama is getting a US remake courtesy of TV and music mogul Simon Fuller. Will this new version live up to the original? Will they be able to maintain the show's engaging presence on social media? Only time will tell...

Winter has come and the end is nigh. Whether you love it or hate it, everyone will be talking about the final episodes of the most watched drama on the planet as the battle heats up for control of the kingdoms. Summer cannot arrive soon enough.

The legendary young adult book series finally gets the onscreen adaptation it deserves via the BBC with Jack Thorne, the writer of the Harry Potter-themed West End play The Cursed Child, taking on the adaptation that's being led by the producing team behind Doctor Who. Expect big things from this one.

The festive special of this forward-thinking sci-fi got us majorly hyped to see where this modern tale of individuals who are mentally linked around the world will go next. Coming to Netflix May 5th and well worth a catch up if you are behind on season 1.

We still can't quite believe this is happening. After the one-off Trump-baiting special, a mini-run of the hit 00s sitcom was officially announced with all the main cast returning, set to act as the perfect antidote to today's troubled news cycle. Quite how they are gonna explain away the plot of the season finale which jumped forward about 20 years we don't know but, hey, we're sure they'll figure it out in time for the Autumn debut.

Got any other shows you can't wait to check out? Let us know below.