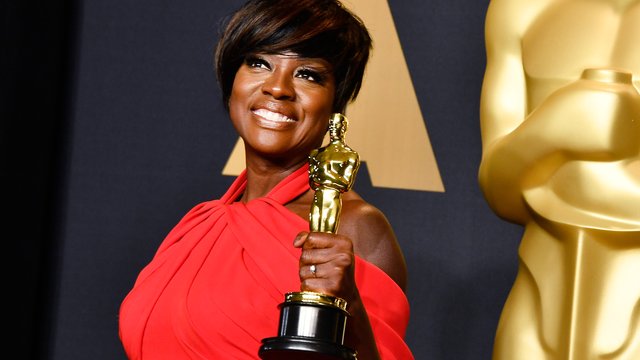 How to get away with making history.

For the last two decades, Davis has led the charge of black women in Hollywood seeking to be recognized for their acting prowess. Last night, Julliard trained Davis cleared a huge hurdle for her contemporaries and those set to come after her.

Davis topped it off by doing it "for the culture" and firmly embedding herself into black history during Black History Month.

When I was a kid, there were no strong black female character on television. These were no Annalise Keatings, Olivia Popes, Cookie Lyons, or Miranda Baileys. There were Elaines, Monicas, and Graces. All of whom I loved, but none of whom looked like me.

It wasn't much better in film, where black women appeared mainly as sidekicks and plot devices and never as romantic interests or high-powered career women.

In 89 years only one black woman (Halle Berry) has won an Oscar for best actress in a leading role. I remember watching this speech as a child, not realizing that I would reach my mid-twenties without seeing another black woman earn this top honour.

It's a bit better for black supporting actresses who have managed to snap up 7 of these honours over nearly 9 decades.

Viola Davis' visibility on both the big and small screens have created hope for young black women where there seldom was. Annalise Keating instructing her "TV kids" on how to get away with murder is, in this capacity, just as culturally salient as her role as Rose Maxson in Fences. Annalise Keating removing her wig and makeup in prime time is still one of my all-time favourite television moments.

After years spent leaning on the Academy awards to recognize the talents and contributions of people of colour, we seem to have been given a flush of POC talent to celebrate.

When film studios allow these stories to be told, we can see they hold water, even against the mediocre favourites (sorry La La Land) of these awarding bodies.

Viola Davis becoming the first African American to win all acting honours at the Emmys, Oscars, and Tony awards isn't just big for her, or for other performers. It's big for young black women competing in predominantly white spaces to be heard, seen, and recognized.

Viola Davis deserved this win. It is beyond fitting for this supremely talented performer to cement her place in black history. She does so during the month of February and within an institution which has had to overcome a long history of shutting out women and people of colour.