VOTE: Who Had The Saddest Death On "Grey's Anatomy"? 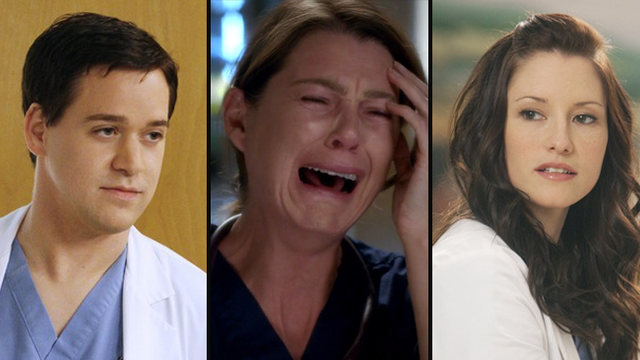 And there's been some pretty damn tragic death scenes during the twelve years the iconic show has been on the air, hasn't there? From the patients (Lexie's mum, George's dad, Adele freakin' Webber...) right down to the doctors that we've loved and lost... *whispers* Derekkkkkkkkkkk - but who's death was the saddest of the all?

Was it George O'Malley's sudden death?

Oh precious Georgie, why did you have to leave for the Army? Why couldn't you have just stayed in your bed, wrapped up all safe and sound? To this day, we can still hear Meredith screaming "Oh my god" as she realises the half dead John Doe is actually O'Malley. Peace out, 007.

Oh, but maybe it was Lexie.

It's the season finale. There's a plane crash. You just KNOW what was going to happen. This time, Lexie was the one that got the chop. After a traumatic heart to heart with Mark Sloan (ugh, we're ugly crying right now just thinking about it) she slipped away, trapped under an airplane and we spent the rest of the summer with our curtains closed and a constant tear in our eye.

Nope, it was definitely Mark.

Juuuust when you thought the worst of that stupid plane crash was over, Mark unexpectedly kicked the bucket in the second episode of season nine as a result of the injuries he sustained in the accident. He woke up from his coma, had a quick chat with Jackson and then slipped away again. WHAT DID SLOAN DO TO DESERVE THIS?! HONESTLY.

Oh but then Derek...

Did we ever HONESTLY think this day would ever come? We always low-key thought dark and twisty Meredith would take that one way trip to Shondaland heaven before Derek ever had to. And yet, here we found ourselves... screaming at Meredith not to turn the life support machine off as 'Chasing Cars' plays in the background once again. The worst, fam. The worst.

Raise your hand if you felt personally victimised by the death of Denny Duquette? *raises both hands* He survived his surgery. He was awake and alive and making jokes and then he wasn't. He died alone, guys. HE DIED ALONE. Kids, learn from this - don't go around cutting LVAD wires, ok?

Actually, forget everyone that we just mentioned above, the saddest death in Grey's Anatomy history was ~definitely~ Doc the dog.

Actually, you know what, we don't even wanna talk about this one. It still hurts. #JusticeForDoc #ADogIsForLife #NotJustAPlotDevice

So... now it's time for you to make your decision. Queue up 'How To Save A Life' on your iTunes, push play and cast your vote.