What Is The Best Season Of Grey's Anatomy? The Winner Has Been Decided... 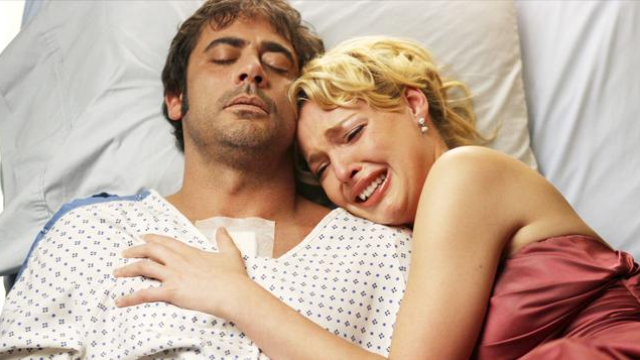 From Derek's death and the bomb in the body cavity to Cristina's final episode and Japril's reunion, here are all 14 seasons of "Grey's Anatomy" ranked from worst to best.

Let's talk about Grey's Anatomy. Grey's is one of the longest running US primetime dramas still in production and despite what all the haters might say, it's still great TV. Don't listen to them. Enjoy your favourite medical drama in peace. We've got your backs.

With two more seasons all but confirmed thanks to Ellen Pompeo's brand new deal, we'll be celebrating the sweet sixteenth of Grey's Anatomy in no time. But until that day comes, it's time to decide, once and for all, which season is truly the best of the bunch. We've ranked all fourteen seasons from worst to best - and if you don't agree with us, you'll just have to fight your corner in the vote at the bottom of the article.

Strap in... because we're about to take an emotionally taxing trip down Grey's lane. Oh, and... SPOILERS. Obviously.

In theory, season four should have been amazing considering it almost started a completely new slate in terms of storylines and relationships. Meredith and Derek had broken up, odds-on lock for Chief of Staff Preston Burke had done a runner, Addison left and the interns had finally graduated to residents. Erica Hahn also joined the hospital staff and started a relationship with Callie and of course, Lexie Grey made her grand appearance... but because the season was cut from 23 episodes to 17 thanks to the writers strike, we never truly got the season we deserved. But we did get that iconic house of candles. Thank you, Shonda.

As with any season that has to follow two major heart-stopping season finales, season 10 didn't quite match the pace of seasons 8 and 9. The storylines also left some fans a little disappointed. (Well, with the exclusion of all the Japril stans who finally got their ship out of the dock and into open waters.) Bailey had a random battle with severe OCD, which has miraculously never really been brought up or triggered since. After TEN YEARS, someone decides to complain to HR about all the sex and relationship bias happening between the surgeons. And it was the season we had to say goodbye to Harper Avery award-losing Cristina Yang. The best part of this season though? That alternate reality episode where Cristina has a dog called Mrs Rodriguez. Iconic.

Season 13 didn't really do much to prove that Grey's still had it. The introduction of Eliza Minnick was truly the worst thing since they tried to shoehorn Penny into the equation - and Hahn before her - but the most frustrating part of this season was the constant need to throw Meredith head-first into another love triangle with her sister Maggie and Riggs. The ending of this season however has truly proved that Grey's CAN still bring the heat (no pun intended) when it comes to show-stopping season finales. Love you Stephanie.

Stand out episodes: "The Room Where It Happens", "In The Air Tonight", "True Colours", "Ring Of Fire"

First of all, rest in peace to Derek and all that but this season almost ruined his character. Fighting and leaving Meredith to go to DC and then kissing another woman? NOT MY NEUROSURGEON! Season 11 was frustrating to say the least because nothing ever went our way, but it wasn't out and out terrible. With Cristina gone, it was fun to watch lots of characters find new footing and the introduction of Nicole Herman was amazing albeit far too short. But don't even get me started on the baby-as-a-plot-twist reveal after Derek's death. That paired with the heartbreaking loss of Jackson and April's baby? Which meant Amelia had to re-live her devastating history? I'm still furious.

Season 7 had the MAMMOTH task of following what can only be considered as the greatest season finale in the history of Grey's but it didn't quite have that edge. The season wasn't without it's big dramatic moments (Calzona's car crash, anyone?) but it never quite managed to capture the magic that seemed to weave so effortlessly into season six.

There were some iconic moments though: Cristina, who suffered from PTSD after being held at gunpoint in the OR, breaking down on a dock holding a fish will forever be one of the most uplifting moments of the show. And the episode where we go off on a "murder mystery" of sorts to find out which doctor was responsible for the death of a patient was SUCH a great 42 minutes. The same can't be said for the musical episode. Sorry.

Stand out episodes: "These Arms Of Mine", "Adrift And At Peace", "Golden Hour", "Song Beneath The Song"

Like Season 7, Season 12 had to follow one of the most emotionally taxing endings of Grey's ever. Derek is dead - now what? It's been a year, Meredith is finally out of his shadow, she is slaying professionally, Karev finally got the BFF he deserves... BAILEY BECAME THE CHIEF! In a lot of ways, season 12 brought hope to an absolutely abysmal situation so we should put some respect on it's name. But the inclusion of Penny and the break up of Japril? HELL NO.

Side note: Ellen Pompeo was robbed of an Emmy nomination for the episode in which she's assaulted by a patient. Robbed. In broad daylight.

Stand out episodes: "Guess Who's Coming To Dinner", "The Sound Of Silence", "Unbreak My Heart", "Family Affair"

Yes, it might be the most recent season but season fourteen has revived Grey's with a force that no one saw coming. In two weeks, the show touched upon trans representation (in both the real world and the fictional doctor world), gave us an on-going domestic abuse storyline (emotional abuse too, which is often overlooked on-screen in favour of physical abuse) and how racial bias comes into play with the all too real issue of police shootings. What Grey's is losing in character drama, it's making up for in powerful, beautifully written social commentary - and it hasn't gone unnoticed.

Season 9 started with a bang and ended with a bang. Just when you thought you had made it through the trauma of the plane crash, Shonda hits you with Mark Sloan's devastating death within the first two episodes. Arizona lost a leg. Derek almost lost a hand. Cristina lost (and found) her shoe. Adele Webber died. Pregnant Meredith fell down the stairs and almost died on the operating table. Webber got fried by the electrical system... Good season though.

Season 8 was drama central. Teddy pulled an Izzie and married a patient. Cristina then operated on said patient and accidentally killed him (it totally wasn't her fault though). Meredith's career was teetering on the edge after tampering with a trial. April lost her virginity to Jackson and then failed the boards. It really was a season to remember... And while the subject has been mentioned in the show before, the decision to show Cristina getting an abortion on a major network prime-time drama was groundbreaking, and so very important.

As for the finale? We'll always remember exactly where we were and what we were doing when we heard there was going to be a plane crash on Grey's. People were gonna die. Unfortunately for us, it was poor Lexie who succumbed to her injuries on that fateful Thursday night. Say it with us: she deserved better.

Stand out episodes: "Dark Was The Night", "If/Then", "Migration", "Flight"

Season 5 is a turning point for all Grey's fans. Not only did we see the addition of Owen Hunt and Arizona Robbins, both of whom changed the face of Grey's as we know it, we also had to deal with Derek's breakdown, a post-it wedding, Mark and Lexie, George leaving and Izzie having sex with ghost Denny - turns out, she had a brain tumour (classic Grey's). And sure, we had been living on the edge with Meredith's bad luck for five years at this point but nothing prepared the fans for that scene with Izzie (flatlined on the table) in the elevator and the doors opening to reveal that George had died on the table at the same time. Game changer.

Stand out episodes: "Life During Wartime", "Before And After", "Elevator Love Letter", "Now Or Never"

The first season was only nine episodes long but my GOD, it was perfect. And lest we forget, the finale episode gave us one of the GREATEST TV plot twists of all time: When Derek's estranged wife and instant legend Addison Forbes Montgomery strolled on up into Seattle Grace, Prada heels clacking away, and uttered the immortal words, "And you must be the woman who's been screwing my husband..." I honestly haven't recovered.

It's a known fact that the third season of any TV show is often considered one of the best and season three of Grey's is no exception. Grey's truly came into it's own in the third season, fresh off SAG Award and Globe wins, it was truly thriving like no other show. Burke and Cristina's attempt to hide his hand tremor. Mark Sloan officially joining the surgical staff. Callie Torres stealing George's heart (and ours). George O'Malley's dad dying. Meredith's mum dying. Meredith almost dying after drowning. The fight for chief. Addison's backdoor pilot for Private Practice. Burke leaving Cristina at the alter. Cristina's eyebrows. Iconic.

I'm gonna get real with you for a second. Grey's Anatomy peaked at season six. Nothing will ever top the finale. Nothing. Easily the best episode of the entire series. If you wanted to, you could stop watching Grey's at the end of season six and live your life happily ever after. But that's not what quitters do. Season six introduced us to April, Jackson, Charles Percy and Reed Adamson by way of the merger. And Teddy joins the staff as the new Cardio God. Izzie leaves Alex high and dry after getting fired. Each member of staff comes to terms with George's death in their own way. And of course... the Gary Clark with a gun seeking revenge on the surgeons that killed his wife. Unforgettable, heart-thumping TV.

Stand out episodes: "Good Mourning", "I Saw What I Saw", "The Time Warp", "Suicide Is Painless", "Sanctuary", "Death And All His Friends"

Usually there's one big double episode event in your average season of Grey's, but not in season two. Season two gave us two HUGE dramatic multiple episode events and both were absolutely mind-blowing. Half way through the season Meredith is hit with her first brush of death thanks to the bomb in the body cavity. And then we're left to deal with the string of events that lead to Denny Duquette's death. Over three episodes, Burke was shot, Izzie cut the LVAD wire, Denny was safe again and then in the blink of an eye, he wasn't.

Season two was also the season we were introduced to Callie Torres and Addison Montgomery, two of the greatest characters the show has ever seen - and Doc the dog. This season truly the benchmark for any and all seasons to come. Denny's death often still ranks ahead of Derek in terms of devastation and the visual of Izzie being carried away from his lifeless body will remain burned into the minds of fans for the rest of time.

Oh, and Chasing Cars? How To Save A Life? Ruby Blue? Breathe (2AM)? Such Great Heights? Grey's invented TV soundtracks in season two.

Stand out episodes: "Into You Like A Train", "It's The End Of The World", "As We Know It", "17 Seconds", "Deterioration Of The Fight Or Flight Response", "Losing My Religion"

Don't agree with our ranking? Vote for the season you think is best below:

QUIZ: This in-depth Grey's Anatomy boyfriend quiz will reveal which character is your soulmate