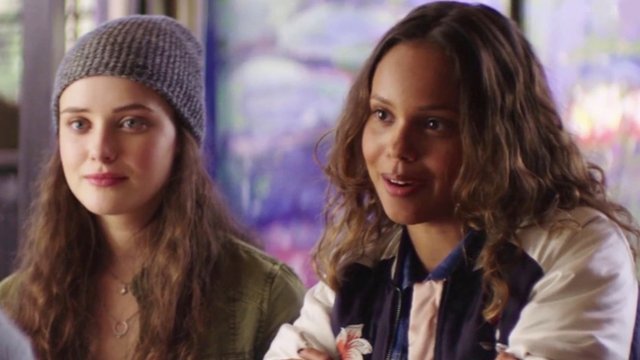 "I didn’t expect it...I thought everyone would sympathise with Jessica"

One of the most distressing scenes, among many, in Netflix's 13 Reasons Why was in episode 9 when Jessica, a high schooler, is raped by the captain of the football team, Bryce Walker.

The scene received a huge reaction online and, rather predictably, some of the response has been to slut-shame Jessica. We all know that victim-blaming is still a massive problem around conversations about sexual assault but in an interview with Elite Daily, Alisha Boe who plays Jessica said the reaction to the storyline caught her by surprise.

"It’s been super interesting because I didn’t expect it, because when we filmed the show", Alisha says when asked about reading the criticism of Jessica's character online. "I thought everyone would sympathise with Jessica because of what she’s been through, to me that made the most sense. She’s a survivor and she’s been trying to deal with it and she’s acting out because of it."

Unfortunately, Alisha has been tagged in a lot of posts which blame Jessica for her sexual assault and it's caused Alisha to re-think societies attitudes towards women who are sexually assaulted.

"I was getting comments and being tagged in photos and fan theories that I can’t help but look at, but basically, people are slut-shaming Jessica. They’re calling her a bitch and they’re saying she deserved it that I should take Justin back and I shouldn’t be that drunk at a party and it made me take a second and step back and realize, wow, we as a society are not able to not blame the rape survivor but more so we want to take Justin’s side because he’s charming and has a nice smile."

"And that makes me so hurt and angry", she added.  "And it makes me want to get more involved in being an advocate for women and men who are sexually assaulted and are survivors of rape because the conversation still hasn’t changed."

Alisha, and the show's executive producer Joy Gorman, are now working with the It’s On Us initiative, started by Joe Biden Barack Obama and Joe Biden, to raise awareness to help put an end to sexual assault. "It didn’t change my perception [of sexual assault], but more so gave me insight on what it’s like to be a survivor", Alisha said. "It was super helpful and I love the cause very much."

To find out more information on It's On Us, here to the website here.