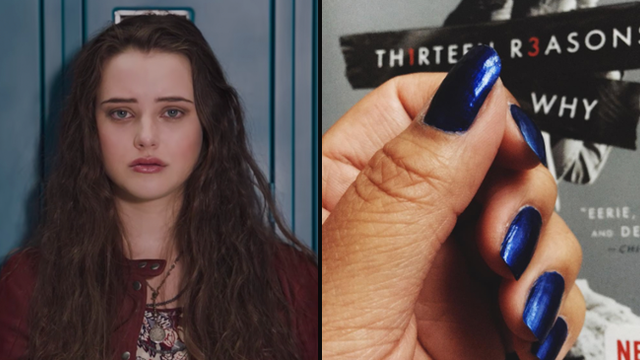 Fans of 13 Reasons Why are posting tributes to Hannah Baker on social media using a very particular colour of nail varnish.

You may have noticed that Selena Gomez and the rest of the cast turned up at the premiere for the show wearing a deep shade of blue on their fingers a few weeks ago. Well, there was a reason behind it and it's pretty moving.

In the book and Netflix series, Clay notices that Hannah's tapes are numbered using blue nail varnish - the same colour that Hannah wore on the last day of her life and the very last time Clay saw her. Later in the show, you'll notice the nail varnish make a few small yet poignant appearances.

Now fans across the world have started painting their nails the same colour to raise awareness for Hannah and people in her situation.

#BLUEFOR13RW what episode are you on ? #13reasonswhy @selenagomez

#BlueFor13RW #BlueForHannah For Hannah Thank you all the beautiful serie

The exact shade? Selena and her stylist used Sinful Colors Endless Blue. So if you wanna raise awareness, show your support for people suffering through the same issues as Hannah, here's your chance. #BlueFor13RY

“Hello boys and girls. Hannah baker here. Live and in stereo. No return engagements, no encore, and this time absolutely no requests. I hope you’re ready, because I’m about to tell you the story of my life. More specifically, why it ended. And if you’re listening to these tapes, you’re one of the reasons why.” -Hannah Baker @13reasonswhy { #SinfulColors Endless Blue is the color worn & used on the tapes by Hannah throughout the series}•••It took Me a few days to get through the whole series & Im currently rewatching! It's so well done, I need to get the book #13ReasonsWhy I recommend anyone who has been to high school or has kids watch this series!#SinfulColorsEndlessBlue