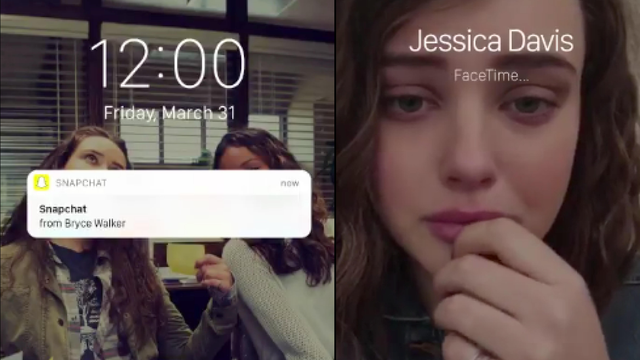 Netflix's 13 Reasons Why has inspired a great deal of introspection, especially with regard to bullying on social media. Lots of people are confessing that it's made them think twice about what they say to people, and that can only be a good thing.

To really drive the point home, the 13 Reasons Why Twitter page has dropped a video about Hannah Baker's social media and we're feeling it right in our souls.

This can't be happening. #13ReasonsWhy pic.twitter.com/GJJNQZVFmO

Some people are saying that it's the perfect illustration of "the snowball effect" and how a few little things going wrong can lead to some really horrible circumstances.

Hannah's home screen is a picture of her and Jessica, which makes the text interaction all the more painful. Bryce? Well, he can choke.
And everyone else's attempts to reach out fall flat because things have started to spiral out of control.

The final, and perhaps most crushing part of the video sees Hannah trying to facetime Jessica after being blocked by her over a crazy rumor. Jessica doesn't pick up and Hannah is visibly heart broken.

As much as the show and this video are inspiring people to be kinder to one another, it's also a lesson in how dangerous apathy toward one another can be. Hitting the block button on a friend instead of hearing them out can be extremely painful reason a person might just check out on life.

People are reacting to the video and it's basically hitting everyone right in the feels.

@13ReasonsWhy every parent, every teacher, every student, everyone should watch this show to realize what small things can cause

As grim and serious as it might feel, Hannah's story is all too common and 13 Reasons Why is finally shedding some light on that.