The Reviews For "AHS: Cult" Are Here And Some People Already HATE It 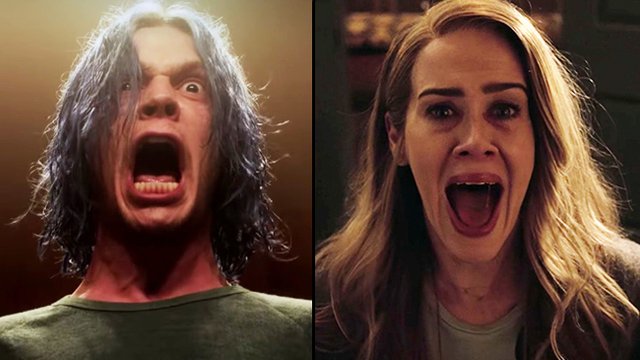 Critics were screened the first three episodes of the new season and they seem split right down the middle about whether it is genius or a disaster.

The first three episodes of American Horror Story: Cult have been screened to critics ahead of its TV premiere on September 5th and the season, loosely themed around the 2016 US election, has certainly provoked some strong reactions online. While many critics have praised the first episode, particulary regarding the performances of stars Evan Peters and Sarah Paulson, some others have been left bemused by the tone which (for now) forsakes the typical supernatural and horror elements you might expect for a more grounded storyline focused on human nature itself.

Here's a quick roundup of what early critics have to say about AHS: Cult:

The Hollywood Reporter: "Just because Cult is working without supernatural elements doesn't mean it isn't full of demented, hallucinatory imagery, as well as the jump scares that come from spotting clowns in places clowns don't belong. Murphy and Falchuk have always approached American Horror Story as an anthology of loving genre homages...So far, I'm properly disturbed by Murphy and company's much-too-close-to-home allegory, amused by some of the sharp social satire and endlessly impressed by Paulson. That should keep me with American Horror Story: Cult longer than I've stuck with several other seasons."

Deadline: "With appropriately over-the-top but engrossing performances from longtime AHS regulars Sarah Paulson and Evan Peters as two very different and very similar sides of the political spectrum, the supernatural-less and often satirical Cult is, as I say in my video review, about letting chaos reign, fear take over and absolute power emerge in the fallout of the accelerant of instability that is America 2017...So, if you are an AHS fan, a horror fan or just want to see good storytelling that is in many ways only a thin narrative membrane away from real life, then watch Cult. For all the politics and stylization, Murphy and Falchuk aren’t clowning around this year."

Indie Wire: "A wretched mess...It’s not hard to see how Ryan Murphy arrived at his premise for “AHS” Season 7. To say that many Americans have been living out their own personal horror story isn’t an overstatement — not with border closings, hate speech, and potential treason all enabled by the White House — but the new season manages to undermine the left’s legitimate fears and amplify the right’s monstrous traits all in one frenzied mess of an allegory...It adds up to a confounding experience that, at best, is easily forgotten and at worst is offensive to all parties. Liberals aren’t just snowflakes with imaginary fears, and the right isn’t only made up of soulless fear-mongers. The politics of fear may work, but the twisted logic in this futile exercise falls apart quickly."

USA Today: "2 1/2 stars out of 4...In contrast to last season's AHS: Roanoke, which conveyed an otherworldly eeriness, Cult is set in the real world of presidential politics and fears regarding child care, online harassment and the environment. That makes it harder to accept the show's  departures into heightened reality. Billy Eichner and Leslie Grossman, playing bizarre neighbors who move into a murder house where they keep bees and a giant weapons cache, are hilarious but hard to take seriously."

Nerdist: "It’s almost impossible to judge this season of AHS completely based on just three episodes, because almost every year starts of strong before flaming out and ending with a whimper. But I can’t say I’m not intrigued by what I’ve seen so far, and will keep coming back for more. Due to its particularly timely subject matter, I’m rooting more than ever for American Horror Story to stick the landing this time."

Vulture: "Essentially, the world in American Horror Story: Cult has gone completely berserk, yet it only seems maybe 20 percent more nuts, tops, than the world in which we actually live. Maybe I’m crazy for enjoying a series that approaches this volatile, still-unfolding chapter in our nation’s history with such gruesome enthusiasm and with its tongue tucked so firmly into its cheek. But we’re all a little insane at this point. American Horror Story: Cult is apparently on a mission to force us to admit it."

Make up your own mind about the season when it premiers this Tuesday (Sept 5th) on FX.