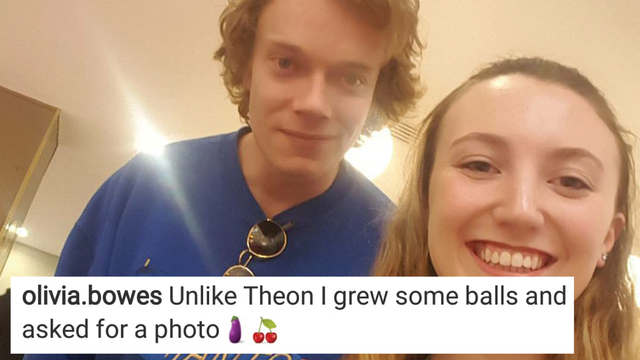 He slid into her Instagram comments with some hilarious facts.

Celebrities lurk Instagram as much as normal people do. That's why, if you're going to fib about a famous person, you shouldn't be surprised when they hit you with an epic clapback.

Alfie Allen, the actor who plays Theon Greyjoy on Game of Thrones, recently set the record straight on Instagram after a fan stretched the truth about how she got a selfie.

Instagram user olivia.bowes posted a selfie with the star and added an amusing caption. "Unlike Theon I grew some balls and asked for a photo," she wrote.

Theon was famously castrated in season 3 of Game of Thrones by the uniquely evil Ramsay Bolton.

Assuming Alfie had never seen her clever quip, Olivia could have gotten away with a pretty badass photo and caption. But, alas. Alfie took to her Instagram comments to remind her that the situation didn't exactly go as she described it.

It sounds like Olivia's mother is the one who grew the aforementioned balls and asked for a selfie. As the kids say, no shade, just facts.

We're sure Alfie was just having a little bit of fun, so no harm done here. But, let that be a lesson kids. The truth will always spare you the sting of an internet clapback.