There Was A HUGE Plot Twist On "AHS: Cult" And Fans Are Losing Their Sh*t 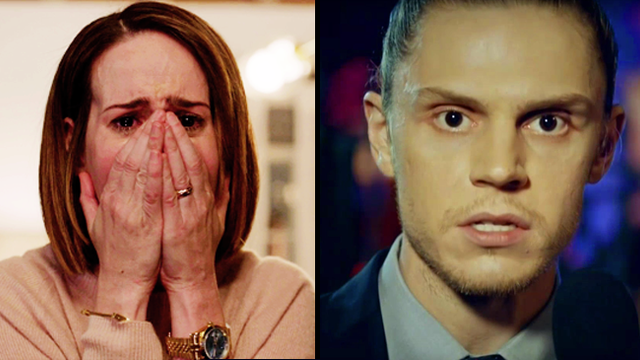 People are calling 'Holes' the best - and most violent - episode of "American Horror Story" ever.

Just when you thought American Horror Story: Cult couldn't get any more NUTS than it already is, they just aired the most horrifying, violent and mind-blowing plot-twist we've seen since Asylum and people are calling it one of the best episodes of all time.

At the start of the episode, we see everyone sitting in Kai's basement talking about how they can elevate their terror beyond the confines of their sad little Michigan neighbourhood and Ally f*cking Mayfair-Richards.

Everyone who we previously suspected as members of the cult are present and correct; Kai, Beverly, Winter, Harrison, Colton Haynes (!), Beverly's cameraman, Chaz Bono from the grocery store. Meadow is still missing but then someone walks down the stairs. Who could it be? Oh... IT'S IVY. Ivy is part of the god damn Cult. We knew it. But that was only the tip of the iceberg, and what happened at the END of the episode had people losing their damn minds.

We finally got Ivy being exposed as a member of the Cult... and Ally finding out about it while she was on the phone to her.

We've got Beverly out here committing murders and then reporting live from the scene within seconds.

We've got a gimp in the attic hanging from meat hooks, who was promptly stabbed by Kai and left for dead.

We've got Kai forcing his merry band of clowns to shoot nails into the head of the poor unsuspecting cameraman.

Me: *watching everyone use the staple gun on RJ* #AHSCult pic.twitter.com/cKBhcN4Fzt

We've got Beverly taking over the reigns and asking Kai to reveal his deepest fears.

Somebody finally asking Kai questions about his past! Bravoooo! #AHSCult

We've got Kai and Winter's dead parents decomposing upstairs in their bedroom.

And then, the most INSANE plot twist in the history of American Horror Story plot twists happened...

As Kai answers Beverly's questions about his life, fears and secrets, we see a flashback to the night his parents died. Young Kai is slumped over his mother's body when his brother, THE THERAPIST walks in. He then instructs Kai to stash their bodies and not tell anyone so they can keep his father's insurance money... and then he makes Kai do the ~pinky promise~ with him.

So...Kai isn't the real crazy one in the family and the Therapist is his brother #AHSCult pic.twitter.com/CqPslIozCm

I cant handle the therapist being the most fucked up out of the everyonet. I mean its genius but THIS SHIT IS IN MOTHERFUCKININSANE #AHSCULT

But what does this all mean?! Is the therapist the TRUE mastermind behind this whole thing, as we've previously suggested? Has he been urging Kai on this path all along? Supplying him with medication to keep him on track? Did the tragic death of his mother inspire Kai to seek greatness by any means necessary? What the HELL is going on?

There's five episodes of Cult left and honestly, literally anything could happen at this point. It just keeps getting better and better.