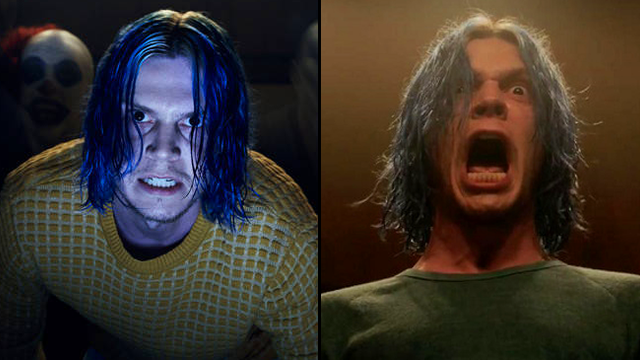 "Evan Peters playing his role a little too well. Gonna have me hating him in real life soon...smh"

If you've ever wanted to see Evan Peters pee into a condom and then use it as a water bomb to throw at someone, today is your lucky day. American Horror Story: Cult aired it's first episode last night (Sept 5) and it was as intense as you could possibly imagine.

The show opens with Kai (Evan) and Ally's (Sarah Paulson) extreme reactions to the result of the US Election last November. Kai is THRILLED that Trump has been elected. In fact, he's so gassed about the outcome, he throws a packet of Cheetos in a blender and smears the dust across his face. It's... quite something.

Evan also had more screen time in the first episode than he did in the entirety of Roanoke (HALLELU!) but after playing a teenage school shooter and a serial killer to name a few, it turns out that the ONE thing that'll make everyone who fancies Evan Peters uncomfortable is an isolated, over-zealous, over-the-top far-right individual who thrives at the fear that Trump has instilled in the people of the country.

I've accepted Evan Peters with his lobster claws, as a serial killer, a teen murderer and a ghost. But as a Trump supporter hell no #AHSCult pic.twitter.com/L1Uo9Utgo7

Me trying to pretend that Evan Peters isnt a republican this season #AHSCult pic.twitter.com/BFnMs8fMSJ

me seasons 1-6: god i love evan peters so much

Even though Kai is BY FAR his most controversial character of the entire series, there's no denying that Evan's skills as an actor are absolutely slaying in the role.

I honestly fucking admire how Evan Peters can play sooooo many different characters (each season). Like wow an icon. #AHSCult

Evan Peters playing his role a little too well. Gonna have me hating him in real life soon...smh #AHSCult pic.twitter.com/7bS4Oa8Trw

evan peters be playing these roles a little too well #ahscult pic.twitter.com/bISrRVcy2P

AHS: Cult will also be Evan's "heaviest season" in terms of screen time and the sheer number of characters he'll be playing so strap in, there's still plenty more to get horrified by.

Honestly don't think we can f*ck with Kai's antics for the next 10 episodes though... But then again, if the role finally gets Evan his long overdue Emmy, we will be willing to negotiate.