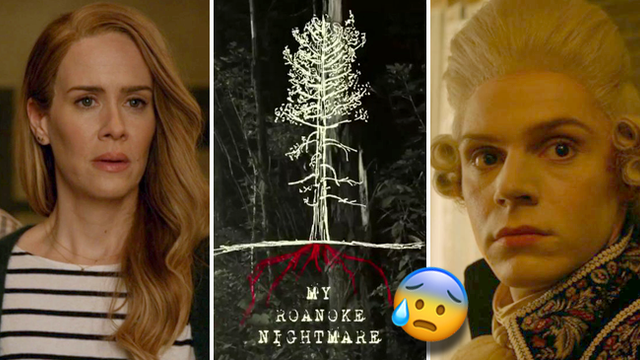 SPOILERS! Do not read this unless you want to die.

It's here. The time has come. The plot twist has arrived and just when you thought this season of American Horror Story couldn't get anymore traumatic... it did.

The episode was directed by Angela Bassett and is the ONLY episode in the history of AHS that made us scream like little b*tch babies. Congratulations Queen, you did that. So... you wanna know what the twist was? Let's relive it together.

The "My Roanoke Nightmare" docu-drama production ended and the storyline flipped to give us a taste of life behind the camera. Thanks to the HUGE success of the docu-drama, the producer Sidney (Cheyenne Jackson) decides to turn this whole Roanoke gig into a massive reality show. He gathers the real life subjects and the actors and throws them into Murder House 2.0 for a three night stay - during a Blood Moon.

We get to learn more about the personal lives of the subjects and the actors; Real Shelby (Lily Rabe) broke up with Real Matt (Andre Holland) and is now having an affair with Fake Matt (Cuba Gooding Jr.). Fake Shelby (Sarah Paulson) ends up marrying Fake Edward Mott (Evan Peters), Real Lee (Adina Porter) was genuinely accused of murdering her husband. Fake Lee (Angela Bassett) has turned into an alcoholic. And the actress who played The Butcher (Kathy Bates) became a huge star and ended up having a massive "Butcher" induced breakdown.

The subjects film their entire experience on iPhone cameras. It's basically Big Brother meets The Blair Witch Project. Toward the end of the episode, a title card flashed across the screen revealing that every single cast member died during those three days of filming under many of the same circumstances seen in the original docu-drama. Well, every cast member... ~except ONE~.

And guess who Ryan Murphy had the NERVE to kill off first... Yep. You already know who it is.

So you give us Evan Peters, kill him. Then you bring him back AND KILL HIM AGAIN. I AM TRIGGERED. #ahs6

waiting all season for Evan Peters just for him to get killed, come back as a different character, and get killed again #AHSRoanoke #ahs pic.twitter.com/rb6Up6l5rn

DID NOT WAIT THIS LONG FOR EVAN PETERS JUST TO DIE THIS EARLY AGAIN #AHSRoanoke #ahs6 pic.twitter.com/lM9vE05K1L

Evan's character Rory ended up being slaughtered by those two creepy AF nurses - looks like they finally found their 'R' to complete the set. Two episodes, barely half an hour of screen time. Why do bad things happened to good people? God dammit Evan!

Anyway, there you have it. Time to place your bets on who gets the privilege of being slaughtered by The Butcher and who makes it to the finish line!

But hang on... if Kathy Bates' Butcher wasn't actually real, who the f*ck is playing the real life Butcher?!

PSA: "American Horror Story" Has Been Renewed For Season 7 And We're Screaming