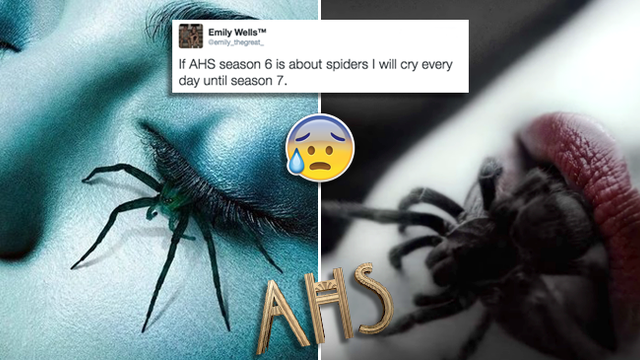 "Arachnophobia", "Eight Legged Freaks", "Harry Potter and the Chamber Of Secrets" - all three are terrifying films that we will never ever watch again. And we really don't wanna have to add "American Horror Story" Season 6 to that list!

You know all that promotional material they've been dropping in the build up to September 14? Well, there seems to be a fair few themes embedded within them. First we spotted the disturbing alien theme and now, after a glimpse of a brand new billboard in LA, we've spotted one that promises to be even more terrifying. Spiders. And they're everywhere.

Seriously, if this is a taste of what is to come then we are logging off, throwing our laptops into a garbage can and leaving planet earth. We didn't sign up for this! You want evidence? Here it is:

Exhibit A: *This* disgusting poster Strike one was the terrifying yet eerily beautiful first teaser poster. This one was bearable. If you squint and tilt your head to side, they just look like really really long eyelashes which is ok, we suppose. We'll let this one pass. FOR NOW.

Exhibit B: *This* nasty-ass teaser trailer

Strike two. If you weren't quite satisfied with spiders crawling out from under your eyelids, here's a NASTY tarantula crawling out of someones mouth. We almost threw up. Not ok.

And we're not the only ones who are shook either.

Is the new season of American Horror Story about spiders? Because I fr won't watch it.

If AHS season 6 is about spiders I will cry every day until season 7.

Please tell us we haven't just waited an entire year for this to end up being about spiders. Please.

All The New “American Horror Story” Trailers Are Fake AF, Except For ONE…