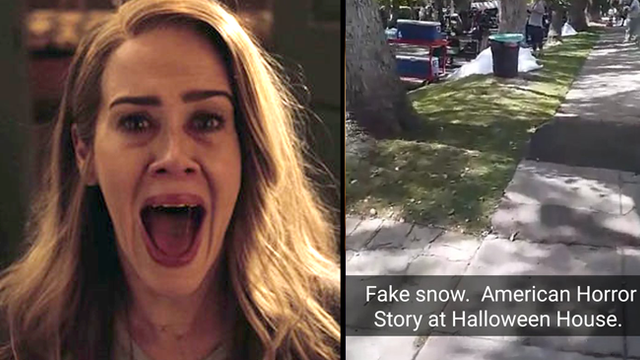 Not so secretive this year then?

Your first ACTUAL look at what American Horror Story season seven is going to look like is finally here! Filming began on AHS7 around the end of May with Sarah Paulson, Evan Peters (with blue hair), Adina Porter, Cheyenne Jackson and Billy Eichner all being seen on set and by the looks of things, season seven is going to be way LESS secretive than Roanoke.

In fact, they're shooting some on location stuff right now in Los Angeles where the season is reportedly set and fans have been sleuthing some pretty cryptic and sneaky pictures. Are you ready for your first look at AHS7?

There's fake snow being sprayed around the set. Actor Trevor Donovan (who has not officially joined the cast) has been sharing pictures on his Snapchat. This also may tie in with the #winteriscoming hashtag that Billie Lourd and Ryan Murphy used on Instagram.

There's a bunch of suburban looking houses that are being used as exteriors. It's also the neighbourhood where the iconic horror movie Halloween (1978) was shot.

They're using these houses for #AHS7 pic.twitter.com/YpkUlB1Dz9

There was also a bunch of police cars and a Coroner's van parked outside one of the houses from the city of Brookfield Heights. There were also "dead" dummies strapped onto stretchers spotted in the street nearby.

And there's an ice cream truck that looks a lot like something straight outta Freak Show. "I scream, you scream, we all scream for ice cream", sounds deliciously ominous, doesn't it?

A fan took this picture from the AHS set. #AHS7 pic.twitter.com/cLlbnNEC9o

Hands up if you can't wait for September.