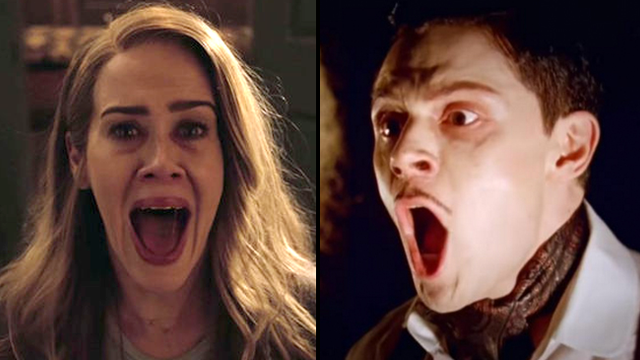 Who will be in it? When will it air? WHAT IS IT ABOUT?!

UPDATE 27/7/17: The first official poster has been released for American Horror Story: Cult and it's a bloody nightmare for those with Trypophobia - and those who just generally find the image of a person's head sliced open to reveal their honeycomb bee-ridden brain.

Be of like mind. The official poster for #AHSCult is here. pic.twitter.com/oRGmYQXXia

As for the rest of the season, here's everything we already know about the upcoming instalment which, unlike the complete and utter hell-scape that was promotion for season six, it looks like it won't be as shrouded in as much secrecy as we previously imagined. Strap in kids, it sounds like it's going to be a wild one.

Is there an official trailer?

Who will be in it?

The only MAIN cast members joining Cult are Sarah Paulson and Evan Peters. Murphy has already stated that they will be the two leads of the show, which means we'll be getting WAY more Evan screen time than we did in Roanoke. Adina Porter, Cheyenne Jackson, Mare Cunningham and Frances Conroy are back for more as well. Angela Bassett and Kathy Burke have not been confirmed for this season but Kathy will be directing.

In other casting news, Billy Eichner (from Billy On The Street/Parks & Rec fame) will be joining the cast in an unspecified recurring role as well as your favourite cast member of Scream Queens - Billie Lourd. Billie has reportedly signed on for a ~leading~ role alongside Evan and Sarah but all other details are being kept under wraps. Teen Wolf's Colton Haynes, Leslie Grossman, Lena Dunham and Alison Pill are also joining the cast.

What is the theme?

The theme is Cult - a long-time fan favourite. Speaking to E! News, Murphy said the 2016 US Election will be used as a springboard for the season's eventual theme.

"It is about the election we just went through and what happened on that night and the fallout of that night, which to many people, from all sides of the camps is a horror story. And you know, that show is always so fun when it's about the zeitgeist and what we're doing now."

Murphy also stated that Hillary and Trump will not feature as characters in the season but when asked if it would feature a Trump-like character, he said, "Maybe..." FFS.

Back in October 2016, Murphy also revealed that the focus of S7 would be on the wider context surrounding Freak Show saying "Next year, we will be going back to some Freak Show characters, deeper histories and mythologies. So we’re sort of still exploring season 4 in season 7."

It's now been confirmed that the season will dive into the legend of Twisty the Clown who appears to have been immortalised as a comic book character. The re-appearance of Twisty also explains the sadistic clown cult that keep appearing in all those creepy teaser trailers.

When will it air?

The official air date of AHS: Cult is Tuesday September 5th. The show will be airing earlier than usual - and now on a different day. Instead of the signature October start date, it's being pushed up to September so that the finale wraps up around Halloween as the AHS gods intended it.

What happened to the crossover season?

Sorry fam, you're going to have to wait a while for the Murder House/Coven crossover season. It looks like that edition of AHS won't be hitting our screens until 2018 at the earliest. Which is great actually, because hopefully by then Jessica Lange will be looking for some work by then. Here's hoping! *cheers emoji*