This Is What The First 10 Minutes Of “American Horror Story” Is Going To Look Like... 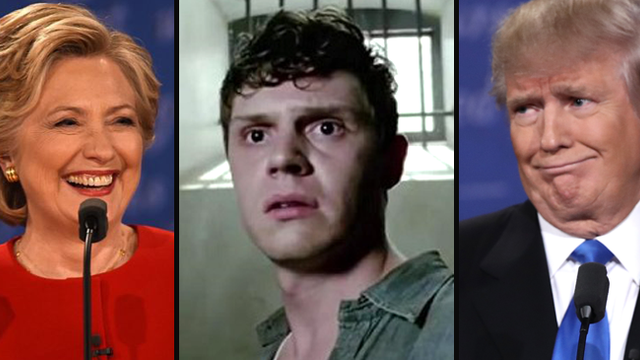 If you thought you could escape Trump, you were wrong.

Sound the alarms - we've got some more information about American Horror Story season sevennnn! In an interview with E! News about the second season of FEUD, Ryan Murphy spilled a few details about the upcoming 'election' season of AHS and what the first 10 minutes of the seventh season is going to look like and it sounds completely wild.

There had already been a few whispers about what the season might entail. Will Sarah Paulson be playing Hillary Clinton? Are they gonna throw Evan Peters into the skin (and hair) of Trump? Billie Lourd? She'd be a PERFECT Ivanka... Thankfully, we can now all rest easy because none of that is going to happen. In fact, what IS going to happen might actually be a little more terrifying.

When asked who would inevitably be playing the pair, Murphy replied: "We don't have actors playing them. You'll see them on television."

Yeah mate, that's right. They themselves are going to be featured within the opening minutes of the show. We're going to be reliving those actual election night moments all over again. Christ, now there's your horror story.

As he's said before, the election will be used as a *springboard* for the eventual theme of AHS7 and presumably not take up the entire season so you can all stop panicking about having to sit down and watch a season of House of Cards' and Scandal's possessed love child now.

Got any theories about what all this could mean? What horrifying event could take place on election night that turns into (fingers crossed) the GREATEST SEASON of American Horror Story yet? Here are our theories. Read 'em and weep, literally.