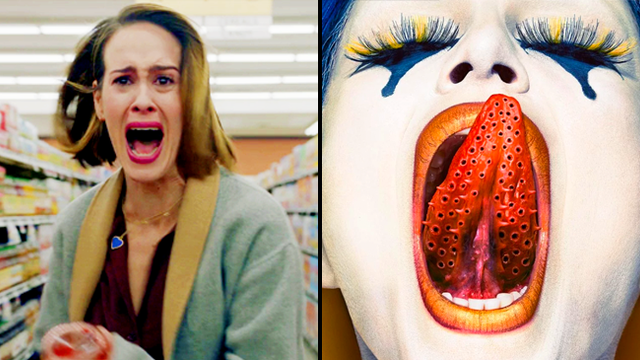 Is this the most controversial season yet?

This latest season of American Horror Story is without a doubt terrifying on every single level. From the clowns breaking into people's houses to kill them to the rehash of the 2016 US election, it's actually quite a hard watch.

But apparently, the murderous, terrifying, 'we're-gonna-bang-in-front-of-these-watermelons-in-the-grocery-store' clowns aren't that much of a problem for viewers. It turns out that another factor of AHS: Cult is has been triggering people's anxiety and it's probably happening to you too.

In the show, Sarah Paulson's character Ally suffers from Trypophobia, a fear of small holes clustered close together. While it's not a medically recognised phobia, it's extremely common.

And now, fans of the show are complaining that they're no longer able to watch it because of the continued use of those horrible tiny tiny holes. Throughout the show, there are close ups (and we're talking EXTREME close-ups) on things like beehives, honeycomb, crumpets, rocks of coral and viewers are claiming that it's making them feel anxious and sick.

As dumb as it is American Horror Story really has me freakin out about god damn holes.

thanks american horror story for triggering my FUCKING TRYPOPHOBIA

I can't even watch the new series of American horror story because I have the worst trypophobia fear :(

American Horror Story is out here terrorizing people with trypophobia.

The holes on American Horror Story has made me feel so itchy and horrible. Hate Trypophobia.

Can I sue FX for the AHS Cult trypophobia posters

If you have trypophobia you need to avoid the new American Horror Story season 7 imagery at all costs... trust

According to CNN, people have even been having panic attacks in the street over the giant creepy billboards featuring the tiny holes. Jennifer Andresen was driving when she clocked one of the billboards and hand to pull her car over.

"I was having a full-blown panic attack, my pulse was racing. I was so nauseous. I thought I would throw up. My mother and grandmother were like, 'What is wrong with you?' I didn't want to ruin my family's day, but I couldn't help myself."

Honestly, this season of AHS is getting too real. To find out more about Trypophobia, click here. Can we have Asylum back now please? Complete with the irrelevant aliens? Please? PLEASE? No more clowns or holes.