This Is The Graphic Unaired Footage That Was Cut From "AHS: Cult" Mass Shooting Scene 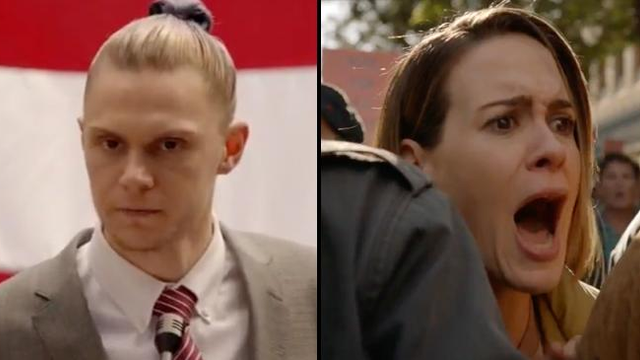 Ryan Murphy made the decision to trim down the graphic violence, but it was still pretty shocking.

After it was revealed that episode six of American Horror Story: Cult would open and close with a mass shooting, there was concern that the violence would be too heavy to air so soon after the deadly attack in Las Vegas just nine days before.

After a brief silence on whether or not the network would air the episode, Ryan Murphy revealed that the scene, shot two months ago, would be re-edited with any gory, graphic or stylised imagery removed. The edited episode would go ahead and air on its intended date, while the unedited version would be available on demand platforms.

Speaking at the New Yorker Festival to Emily Nussbaum, Murphy explained his decision: “I believe I have the right to air it but I also believe in victims’ rights and I believe that now is not the week to have something explosive or incendiary in the culture.” He said the scene was intended to “be an obvious anti-gun warning about society."

The episode aired as usual last night (Oct 10) but the standard opening scene was noticeably shorter. According to PopSugar, the opening scene in the original cut was over two minutes long. Instead, it was trimmed down to almost less than a minute.

There was also a number of gory on screen deaths that were cut from the sequence, including a man who is shot in the head right in front of Ivy as she tries to help him. Close ups of the gun were also completely cut from the scene.

WARNING: The footage in the video below is pretty heavy. This is the full unedited opening scene from episode 6.

Despite cutting the scene down considerably, viewers still found the edited opening sequence pretty jarring. The ending of the episode, which was apparently left unedited, was also MUCH more graphic than the start of the episode.

#AHSCult they must've accidentally put out the unedited version of this episode, cause..... pic.twitter.com/XTgGQr2Ilw

Ummm I thought it was edited I HAVE to see the unedited version now #AHSCult pic.twitter.com/0DdeDYhHUx

AHS: we edited this episode so it doesn’t have guns anymore

*gunfire into crowd 0.03 seconds into the episode* #AHSCult

I'm tryna figure out what part of the gun violence they decided to cut out because...... #AHSCult pic.twitter.com/j4gsmzDSgr

As for the rest of the episode? We're not going to spoil you with the details, you'll just have to watch it yourself. What we can say is that this season is hands down the most thought-provoking, terrifying and eye-opening season of AHS that we've ever seen.

P.S. Frances Conroy returns to AHS in the next episode and she looks absolutely terrifying.