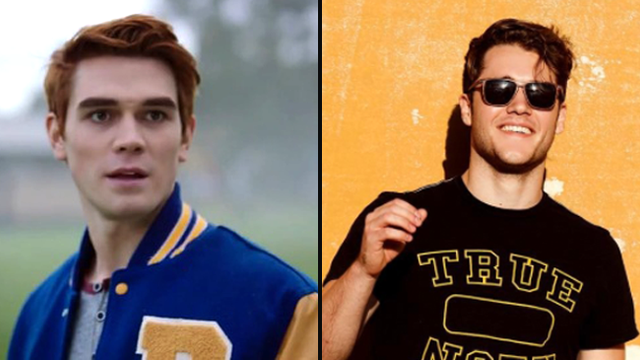 Thankfully, he got cast in another one of your new favourite TV shows.

Just when you thought you couldn't handle any more Riverdale bombshells, we've got another one for you.

As fans of Riverdale will know, the producers were undecided about who should play Archie Andrews for quite a long time. KJ Apa, who eventually got the role, was one of the very last people to walk into the room to audition. He wasn't ginger, he wasn't All-American but he *was* apparently what the producers were looking for. He was up against one other actor before he was officially cast as Archiekins and we have a feeling that you MAY have heard of him...

Charlie DePew, who is currently starring alongside Bella Thorne in Freeform's Famous In Love (watch it, it's amazing), auditioned for the role of Archie and actually got down to the final two with KJ.

In an interview with NKD magazine, Charlie revealed what happened: "After losing the role [of Jake on FIL] the first time, I actually went out and auditioned for The CW. It was between me and KJ Apa and I think we all know how that ended up. After that, I was really ready to just step away from acting for awhile; thank God I didn’t quit when I thought I would because everything worked out the way that it was meant to."

He also spoke out about his 'almost' casting on Instagram a few weeks ago.

4/13 - 4/20 :: The best week of my life. 14 months ago I had an audition for a little show called Riverdale... I was being HEAVILY considered to reprise the comic book role of Archie in its tv adaptation. 2 months before this I was turned down to play the role of Jake Salt in Famous in Love. When Riverdale fell through the cracks for me, I had had enough. That gloomy February day I went on the longest hike of my life and contemplated my career. "Do I really want to act?" "It's been 8 years and things aren't working out." //// "SHOULD I QUIT?" A little voice told me not to and 3 months later the show that once turned me down took me in with open arms and I was overjoyed. Two nights ago our show @famousinlovetv premiered to the BEST CABLE DEBUT RATINGS FOR YOUNG WOMEN AUDIENCES SINCE OJ SIMPSON VS THE PEOPLE 14 MONTHS AGO!!!!!! That stat sent chills down my spine... 8 years of this and I can tell you one thing. Consistent persistence = success // to everyone that watched our show last night, thank you.

Wow! What a plot twist. Can you see him playing Archie Andrews?

We mean, he looks GREAT in denim. A perfect look for a casual Saturday spent down by Sweetwater River.

And - dare we say it - manages to pull off Archie's signature shirtless look with absolutely zero effort.

There's even picture evidence of Charlie looking bomb AF in the blue and gold colours of Riverdale High.

With KJ playing Archie and Charlie playing Jake, at least now we can have the best_of_both_worlds.mp3. See... it all works out in the end. Everyone is happy, even Kevin Keller.