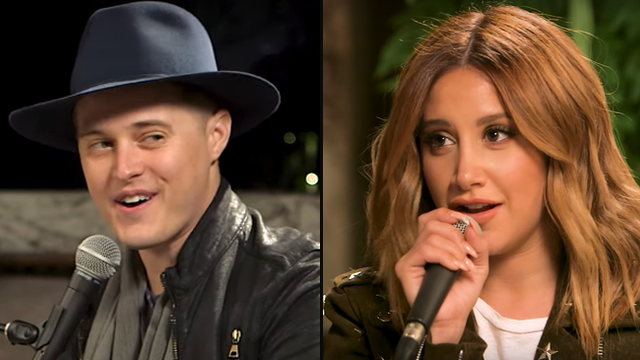 Stop what you're doing and watch this video of High School Musical's very own Ashley Tisdale and Lucas Grabeel performing 'What I've Been Looking For' together for the first time in 10 years. *screaming*

Not only did they give us a brand new version of their first duet, they also spilt some tea on their own friendship - they confessed that they hated each other during the filming of the first HSM movie! Ashley recalls, “All I remember is, we were not close. We were not good friends. It’s been 10 years, we can totally talk about this! We hated each other.” Don't worry though, after they wrapped, they became good friends and clearly still are to this day, otherwise we wouldn't be sitting here freakin' out about this acoustic duet, would we?

Listen to the performance below and try to keep your jazz squares at bay:

Ashley previously reunited with Vanessa Hudgens on her YouTube channel but it wasn't for a High School Musical number - Sharpay and Gabriella famously never had a duet in the whole trilogy. But they did finally give us the duet we deserved with Elle King's 'Ex's and Oh's'.

All those in favour of Lucas returning for a sequel to perform an acoustic version of 'Humuhumunukunukuapua'a', raise your hand.