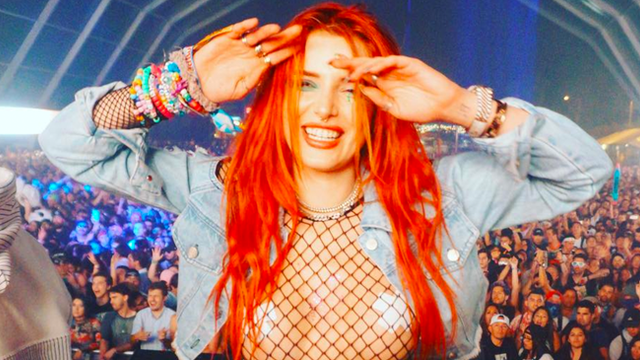 "IM A HUMAN BEING AND IM REAL. GET OVER IT."

It's ALL happening for Bella Thorne at the moment - but then again, when is it not? Over the past week, Bella has snagged herself a new girlfriend in YouTuber Tana Mongeau, engaged in NSFW beef with ex Blackbear and now she's gone and posed completely nude for GQ Mexico.

Before you start preparing your 280 character Twitter rant about Bella's "attention seeking" behaviour, you should probably read the statement she left under the picture on her Instagram. It turns out that Bella had asked the magazine to refrain from photoshopping and retouching the nude picture in particular so she could make a very important point about body-positivity and image insecurities.

And you know what, she looks f*cking amazing.

The caption reads: "I specifically asked for no re touching on this photo, and lemme tell you I have insecurities, about pretty much everything. That's natural & that's human. You might look at this photo and think oh shush bella, but just know everytime someone looks in the mirror they simply don't see what everyone else sees."

"Know that it's completely normal to feel insecure and it's accepted. honestly I wish everyone talked more about their insecurities so more people in the world could know they aren't alone. That it's ok. As a public persona you know naturally that everytime you shoot with a magazine there is always small retouching."

"Cuz yeah if they show my acne scars or a wrinkle in my forehead or my teeth aren't perfectly white, people will look at the photo and say no she's not perfect and usually most people don't want the public trashing and I get it, But fuck it I'm here to tell you that's right I'm not FUCKING PERFECT. IM A HUMAN BEING AND IM REAL. So hip hop your asses over the fence and GET OVER IT."

Her fans immediately started commenting underneath the same post on Twitter with their praise for Bella - and expressed how hard they were losing their sh*t over the pictures.

queen of promoting body positivity and self confidence

You look so good wtfff

I am LIVING for this