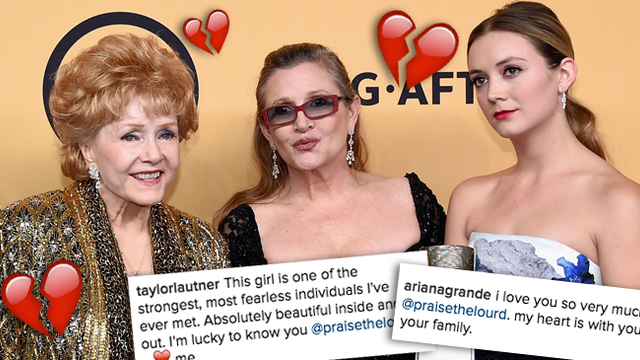 Ariana Grande, Taylor Lautner and Abigail Breslin amongst others are sending their love.

Following the passing of both her mother, Carrie Fisher, and her grandmother Debbie Reynolds, Scream Queens actress Billie Lourd has been flooded with emotional tributes and messages of support from her co-stars and friends on social media.

Ariana Grande, Jamie Lee Curtis and Lea Michele have all shared their moving memories of the two stars and voiced their support for Billie.

"That light, that beautiful twinkle of the eye that assures a pure heart with a high chance of mischief that made Debbie and Carrie legends, will live on through Billie Lourd," wrote Glen Powell, who played Chad Radwell in the FOX TV series.

Read all the heartbreaking tributes below.

This girl is one of the strongest, most fearless individuals I've ever met. Absolutely beautiful inside and out. I'm lucky to know you @praisethelourd .. , me.

My mother's heart goes out to this exquisitely talented young woman. Her mother's spirit and talent lives on in her and I'm sure all of Carrie's fans and friends will give her space and privacy.

There are no words. Just that we all want 2 surround Billie with loving strength & support. Please give her space media. Please. Please.

i love you so very much @praisethelourd. my heart is with you & your family.

i love you billie. so so much. rest in peace, debbie reynolds.

Holding my dear friend billie, and her sweet mommy Carrie in my heart right now..

My heart today.. I love you Billie. pic.twitter.com/2AhltGzn3P

Oh how you loved telling stories about your mom -and I loved hearing them.  I loved watching your face light up.  You were so proud of her and she of you. She will live through you forever and we’re all lucky for that. Love you Billie.

What a treasure Debbie Reynolds was. When I first met Billie, I told her that Debbie Reynolds was my first crush. Weird thing to say about someone's grandmother. But "Singin' in the Rain" is one of my all-time favorite movies, the reason I began to tap, and one of the biggest influences pushing me into entertainment. The Powell family and I have attempted the "Good Morning" tap routine (very poorly) in which Debbie radiated that old school, wholesome, optimistic star power that now feels somewhat lost. That light, that beautiful twinkle of the eye that assures a pure heart with a high chance of mischief that made Debbie and Carrie legends will live on through Billie Lourd. This bloodline is blessed with beautiful, courageous women. My heart goes out to the Fisher and the Lourd families.

Right after I took this pic I realized how much Bill looked like Carrie. Both so beautiful. RIP Carrie, you were amazing... and thank you for making such an incredibly brave, kind and brilliant person who I'm lucky to call my best friend.

Our thoughts are with Billie and her entire family.